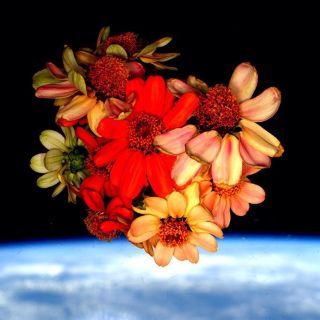 After a bout of mold threatened the crew’s crop of zinnias, Kelly nursed the flowers back to life. He posted a photo of this beautiful bouquet to celebrate Valentine’s Day.
(Image: © Scott Kelly/Instagram)

What do you do if you're stuck zooming above the Earth in a space station about the size of a football field for 340 days? You take a lot of pictures.

At least, that's what astronaut Scott Kelly did — along with growing space lettuce, going on spacewalks to renovate the International Space Station and participating in experiments to test how a year in microgravity affects the human body, of course.

Even with the experiments and maintenance work, though, a year on the space station (which equals about 5,000 trips around the Earth) leaves plenty of time to take some stellar photos — and when Kelly touched down on Earth on March 1, he had posted more than 1,000 pictures to Twitter and Instagram. [One Year in Space: Epic Space Station Mission in Photos]

Landscapes that look like abstract art, stunning pictures of the Milky Way, and one of the coolest selfies ever taken — pictures like these made Kelly's social media accounts out of this world, literally.

Take a peek at 12 of our favorites, one for each month Kelly lived on the International Space Station.

After a bout of mold threatened the crew's crop of zinnias, Kelly nursed the flowers back to life. He posted a photo of this beautiful bouquet to celebrate Valentine's Day.

Sunrise on the ISS means not only a brilliantly lit up Earth, but also a lit up space station. The glow from the Earth surrounds the whole station in an orange glow.

Kelly snaps one of the coolest selfies ever taken—himself suited up for a spacewalk.

Cool blue water of the Bahamas makes this shot look more like abstract art than a picture of the Earth.

Hurricane Jimena swirls over the Earth, and dwarfs the moon in the distance.

The brilliant colors of an aurora light up the Earth.