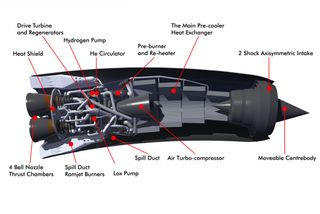 Diagram of the reusable SABRE engine, which employs a revolutionary heat exchanger to chill incoming air dramatically before it is fed to the engines.
(Image: © Adrian Mann)

Within the next year, the U.S. Air Force plans to unveil novel spacecraft concepts that would be powered by a potentially revolutionary reusable engine designed for a private space plane.

Since January 2014, the Air Force Research Laboratory (AFRL) has been developing hypersonic vehicle concepts that use the Synergetic Air-Breathing Rocket Engine (SABRE), which was invented by England-based Reaction Engines Ltd. and would propel the company's Skylon space plane.

In April 2015, Reaction Engines announced that an AFRL study had concluded that SABRE is feasible. And AFRL is bullish on the technology; the lab will reveal two-stage-to-orbit SABRE-based concepts either this September, at the American Institute of Aeronautics and Astronautics' (AIAA) SPACE 2016 conference in Long Beach, California, or in March 2017, at the 21st AIAA International Space Planes and Hypersonic Systems and Technologies Conference in China, said AFRL Aerospace Systems Directorate Aerospace Engineer Barry Hellman. [The Skylon Space Plane in Pictures]

The key SABRE technologies that AFRL, based in Ohio, will start work on later this year, and possibly fly in the future, are related to the engine's precooler. This device precools the air entering the engine at speeds greater than four times the speed of sound (Mach 4). SABRE's precooler will cool such air from more than 1,832 degrees Fahrenheit (1,000 degrees Celsius) down to minus 238 F (minus 150 C) in one one-hundredth of a second. The oxygen in the chilled air will become liquid in the process.

The AFRL precooler test program, which is called Durable Pre-cooling Heat Exchangers for High Mach Flight, consists of three phases, the last of which could involve test flights, according to an AFRL description. But AFRL officials told Space.com that there are no specific plans at this time for flight tests.

Applications for the program had to be submitted by companies by Feb. 17. No budgetary information is available, and Reaction Engines could not confirm that it will participate. The program's first two phases will replicate, in the United States, the precooler testing that Reaction Engines has already carried out at its own facility in Abingdon, England.

SABRE and the Skylon space plane were invented by Alan Bond and his team of engineers at Reaction Engines. Bond now works three days a week for the company in a chief scientist/chief engineer role.

SABRE burns hydrogen and oxygen. It acts like a jet engine in Earth's thick lower atmosphere, taking in oxygen to combust with onboard liquid hydrogen. When SABRE reaches an altitude of 16 miles (26 kilometers) and five times the speed of sound (Mach 5), however, it switches over to Skylon's onboard liquid-oxygen tank to reach orbit. (Hypersonic flight is generally defined as anything that reaches at least Mach 5.)

Reaction Engines is planning to have a ground-test SABRE engine ready by the end of the decade. However, Jeremy Nickless, the firm's marketing and communication executive, distanced the company from the milestones described to Space.com previously.

Nickless did confirm that Reaction Engines has raised more than 30 million pounds sterling ($41.9 million at current exchange rates) in private funding. In November 2015, United Kingdom defense contractor BAE Systems, which has 37,000 employees in the U.S., invested 20.6 million pounds ($28.8 million) in Reaction Engines for a 20 percent stake in the company.

The AFRL cooperation with Reaction Engines is continuing under a Cooperative Research and Development Agreement that was announced in January 2014.