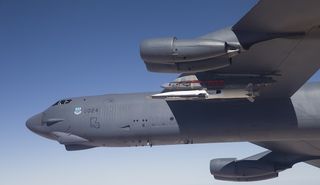 The U.S. Air Force's experimental X-51A Waverider vehicle flew under its own power for four minutes on May 1, 2013, reaching a top speed of Mach 5.1.
(Image: © Wright-Patterson Air Force Base)

High-tech weapons may be screaming through the skies at five times the speed of sound by the middle of the next decade, U.S. military officials say.

That's the most optimistic timeline for the battlefied debut of a superfast new strike capability, officials said, and it depends on continued research into hypersonic vehicles like the Air Force's X-51A Waverider, which completed its final test flight earlier this month.

The Air Force is "trying to get the technologies mature enough that in the 2020 timeframe we would like to be able to show the warfighter that we would be ready to start a development program of record sometime around that time," said Charlie Brink, X-51A program manager for the Air Force Research Laboratory Aerospace Systems Directorate. [See photos of the hypersonic X-51A weapon prototype]

"If we go forward with that plan, we probably won't start hitting the battlefield until at least the 2025-2030 timeframe," Brink told reporters on May 9.

Toward a hypersonic strike force

Typical cruise missiles travel at around 500 to 600 mph (800 to 965 km/h), Brink said. There are obvious advantages to ramping up to hypersonic flight, which is generally defined as anything that reaches at least Mach 5, or five times the speed of sound. (The speed of sound at sea level is about 762 mph, or 1,226 km/h.)

"That not only brings a whole set of responsiveness to the warfighter, it also, at those speeds, enhances the survivability of those systems as they overfly enemy territory," Brink said.

So the U.S. military has been researching ways to achieve a rapid strike capability. The Defense Advanced Research Projects Agency (DARPA), for example, has launched two trials of its HTV-2 unmanned hypersonic bomber prototype, which reached Mach 20 in an August 2011 test flight before losing control.

And the Air Force worked with DARPA on the $300 million X-51A program, which began in 2004 and wrapped up this month with the test flight of the fourth and final robotic Waverider scramjet vehicle.

On May 1, the Waverider was carried aloft by a B-52 bomber and released over the Pacific Ocean off the California coast. The vehicle accelerated to Mach 4.8 using a solid rocket booster, then reached Mach 5.1 with its air-breathing supersonic combustion ramjet (scramjet) engine before crashing into the sea as planned.

The previous two Waverider flights, in June 2011 and August 2012, both failed. But this final one was a rousing success, Brink and others said.

"All in all, it was a very, very good day," Brink said. "We got all the data that we wanted on our last flight-test vehicle, so we were ecstatic with the results."

While the military has no plans to resurrect the X-51A, another hypersonic program may well follow in the vehicle's footsteps soon.

"We're busily working with leadership on what the next steps are to take, and I'll leave it at that," Brink said.

A lot of work still needs to be done before hypersonic scramjets first see action in battle, but the technology shows great promise, officials said.

"It's really close," said Joe Vogel, X-51A program manager at Boeing, which built the four Waveriders for the Air Force. "I'd say the tools, the development of the technology under the Air Force's leadership — we've evolved to the extent where this isn't invention. It's execution at this point."

Commercial hypersonic scramjet flight would likely come soon after the technology achieves military use, he added.

"You look historically, after things are used for military applications, there's a couple of years and it usually then works its way into commercial application," Vogel said. But in this case, he added, commercial and military use "may happen about the same time, because the timeframes have been shrinking over the course of many years."