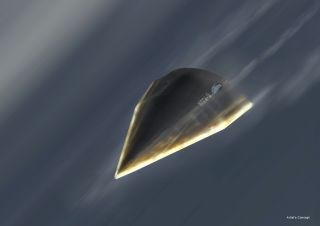 An ultra-fast U.S. military drone that streaked across the sky at 13,000 mph and met its demise in the Pacific was doomed by the excessive heat of hypersonic travel, which literally peeled away the drone's metal skin, military officials have revealed.

A seven-month study by the military's Defense Advanced Research Projects Agency, or DARPA, has found that the so-called Hypersonic Technology Vehicle 2 (HTV-2) amazingly recovered from shockwaves that forced it to roll while traveling at Mach 20 (about 20 times the speed of sound) in an August 2011 test. But the unmanned aircraft was unable to cope with damage to its exterior caused by its extreme speed, DARPA officials said.

According to DARPA, "a gradual wearing away of the vehicle's skin as it reached stress tolerance limits was expected. However, larger than anticipated portions of the vehicle’s skin peeled from the aerostructure." [Photos: DARPA Hypersonic Mach 20 Test]

DARPA launched the arrowhead-shaped HTV-2 flight on Aug. 11 in the second of two tests of a prototype for a hypersonic glider as part of the advanced Conventional Prompt Global Strike weapons program, which is aimed at developing a bomber capable of reaching any target on Earth within an hour. The first test occurred in 2010.

"The initial shockwave disturbances experienced during second flight, from which the vehicle was able to recover and continue controlled flight, exceeded by more than 100 times what the vehicle was designed to withstand," DARPA Acting Director Kaigham J. Gabrielsaid in a statement. "That's a major validation that we’re advancing our understanding of aerodynamic control for hypersonic flight."

The HTV-2 launched atop a rocket from California's Vandenberg Air Force Base, then came streaking back to Earth at hypersonic speeds. Hypersonic flight is typically defined as any flight that surpasses the speed of Mach 5.

When HTV-2 reached Mach 20, it experienced temperatures of nearly 3,500 degrees Fahrenheit. NASA's space shuttles, for comparison, flew at speeds of up to Mach 25 when they re-entered Earth's atmosphere.

That safety system, once it realized the HTV-2 was in an unrecoverable situation, destroyed the vehicle by pitching it into the ocean.

"The result of these findings is a profound advancement in understanding the areas we need to focus on to advance aerothermal structures for future hypersonic vehicles. Only actual flight data could have revealed this to us," said Air Force Maj. Chris Schulz, DARPA program manager.

DARPA officials said that more analysis on the HTV-2 test flight will continue via ground tests and will be used as a resource for future Conventional Prompt Global Strike weapons technology efforts.