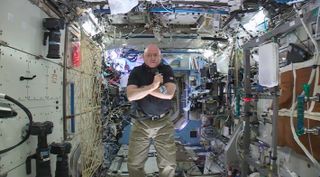 NASA astronaut Scott Kelly talks to reporters on Feb. 25, 2016, less than a week before the end of his 340-day stay aboard the International Space Station.
(Image: © NASA TV)

Scott Kelly is about to head home after 11 months aboard the International Space Station, but the astronaut says he could have stayed in orbit for another year if NASA had so desired.

Kelly and cosmonaut Mikhail Kornienko will come back to Earth Tuesday (March 1), wrapping up an unprecedented 340-day stay on the orbiting lab. (Crewmembers typically live and work aboard the station for 5 to 6 months at a time.)

The nearly yearlong mission has been challenging in a number of ways, Kelly said, citing the extended isolation from loved ones as the hardest part. But he said he feels good enough physically and psychologically that he could have broken the all-time record for most consecutive days spent in space — 437, set by cosmonaut Valeri Polyakov aboard Russia's Mir space station in 1994-95 — if circumstances had called for him to do so. [One Year in Space: Epic Space Station Mission in Photos]

"I could go another 100 days," Kelly said today (Feb. 25) during a news conference he conducted from the orbiting lab. "I could go another year if I had to. It would just depend on what I was doing and if it made sense — although I do look forward to getting home here next week."

Scientists are investigating how the rigors of long-term spaceflight affect Kelly and Kornienko — an effort that's aided by studying Kelly's identical twin brother, Mark, himself a former NASA astronaut, who stayed on the ground and serves as a control for genetic analyses of Scott.

The main goal of the 11-month space mission is to help prepare for future crewed missions to Mars, which will require lengthy journeys through deep space, NASA officials have said. (The space agency aims to get astronauts to the vicinity of the Red Planet by the end of the 2030s.)

Scott Kelly said he has noticed some changes to his vision during the long mission — a common side effect of long-term microgravity exposure. But he said that, overall, his body and his mind feel pretty good.

"Even though I really look forward to going home, it's not like I'm climbing the walls," he said.

In fact, Kelly added, he was much more eager to get back to Earth toward the end of his previous mission aboard the International Space Station, a 5-month stint that ended in March 2011.

"And I think that probably had a lot to do with the fact that my sister-in-law, Congresswoman Gabrielle Giffords, was shot two months prior," Kelly said.

Giffords, a Democrat who represented Arizona's 8th Congressional District in the U.S. House of Representatives, is married to Mark Kelly. She was shot in the head outside a Tucson-area Safeway store on Jan. 8, 2011.

Giffords suffered a serious brain injury but survived. She resigned from Congress in January 2012.