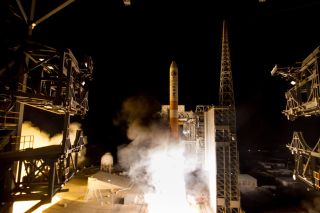 A Delta IV rocket lifts off from Vandenberg Air Force Base carrying the NROL-45 mission for the National Reconnaissance Office on Feb. 10. 2016.
(Image: © United Launch Alliance)

A new U.S. military satellite streaked into the sky early this morning on a clandestine reconnaissance mission, lighting up the pre-dawn sky over its California launch site.

It's unknown what exactly NROL-45 will be doing as it zips around Earth; the satellite's payload is classified. A brief mission description on ULA's website simply says the NROL-45 mission will "support national defense." [The Most Destructive Space Weapons Concepts]

The National Reconnaissance Office (NRO) is the federal agency in charge of designing, building and operating the United States' fleet of spy satellites.

The NRO was set up in 1961, just four years after the Soviet Union kicked off the space age with the launch of the satellite Sputnik 1. The agency worked in secret for more than three decades before its existence was finally declassified in 1992.

Three more NRO missions are scheduled to blast off in 2016 — one each in May and June from Florida's Cape Canaveral Air Force Station, and another one in December from Vandenberg.

The May launch will employ ULA's Delta IV Heavy rocket, the most powerful American booster in operation today, to loft a mission called NROL-37. But NROL-45 was carried to orbit this morning by a different rocket in the family, the Delta IV Medium.

Both the Delta IV Heavy and Delta IV Medium are two-stage launchers, but the Heavy can loft much more mass to space. For example, the Heavy can carry 14,880 lbs. (6,750 kilograms) to geosynchronous Earth orbit, compared to 4,960 lbs. (2,250 kg) for the Medium 5.2 (the variant used on the NROL-45 mission), according to ULA documents.