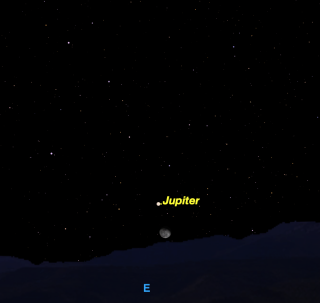 On Wednesday night, Jan. 27, the moon and Jupiter will rise together in the east at around 9:30 p.m.
(Image: © Starry Night Software)

If you've had clear skies the last few nights, you probably enjoyed the sight of the nearly full moon rising in the east around dusk. Tonight (Jan. 27), the moon will not be alone; it will rise with the planet Jupiter just a short distance above it.

Jupiter has been a "morning planet" for the last several months, but tonight marks its return to the evening sky.

Over the next few weeks, Jupiter will rise a few minutes earlier each night, until it reaches opposition on March 8, meaning it will be directly opposite the sun in the sky, and visible the whole night. The moon, meanwhile, will rise about 50 minutes later each night due to its orbit around the Earth. Tonight, it rises around 9:30 p.m. your local time, possibly slightly earlier or later depending on your location. [12 Must-See Skywatching Events of 2016]

Jupiter is the second brightest planet in the sky, outshone only by Venus, which is currently rising just before the sun. So if you go out in the late evening, the brightest thing you will see, other than the moon, will be Jupiter.

This planet can be enjoyed by anyone, whether or not they have optical assistance. With the naked eye, Jupiter is just a point of light, but it shines as brightly as the headlight on a locomotive. If you look carefully in binoculars, you can spot the tiny dots of Jupiter's brightest moons alongside the planet; it helps if you steady the binoculars on a tripod.

In a telescope, Jupiter really comes into its own. The planet's four brightest moons change positions, hour by hour and night by night, but almost always in a straight line east and west of the gas giant. At times, they move in front of or behind the planet, and frequently they cast their shadows on Jupiter, creating tiny, black dots. Even in the smallest telescope, you should be able to see a couple of dusky cloud belts on Jupiter's face. Larger telescopes reveal a wealth of detail, including multiple narrow belts.

Then there is Jupiter's Great Red Spot, a gigantic storm in the planet's cloudy atmosphere. The spot is several times larger in diameter than planet Earth, and has been tracked by astronomers for hundreds of years. Its color has varied over the years, at times brick red and at others totally pale so that it almost vanishes against the background clouds, only detectable by the gap it makes in Jupiter's South Equatorial Belt.

Currently the Great Red Spot is a difficult object to see in most amateur telescopes, its color a pale salmon pink. I've been unable to see it in anything smaller than a 6-inch-aperture (15.2 centimeters) telescope. If you go looking for this feature, remember that because of the planet's rotation, the Great Red Spot is on view only during the half of the rotation when the spot is pointing toward Earth. Even then, it must be fairly close to the center of Jupiter's disk to avoid getting hidden by the hazy edges of Jupiter's atmosphere.

If you use a planetarium program like Starry Night to determine when the spot is visible, be sure that the program has up-to-date data on the spot's position, as the feature drifts back and forth in longitude over time. That's because the spot is an atmospheric feature, not tied to any particular location on the planet below.

If you look again later in the week, the two bodies will no longer be together. Jupiter is rising a few minutes earlier every night, while the moon rises 50 minutes later.

Jupiter and the moon rising together should make for some excellent photo opportunities. Be sure to zoom in on the two objects to simulate the "moon illusion" seen with the naked eye, but which doesn't photograph well without extra magnification. Under this illusion, the brain sees a rising moon as much larger than it really is, but cameras are not fooled in the same way.

Editor's note: If you capture a stunning view of Jupiter and the moon tonight, and would like to share it with us and our news partners, you can send in images and comments in to managing editor Tariq Malik at: spacephotos@space.com.

This article was provided to Space.com by Simulation Curriculum, the leader in space science curriculum solutions and the makers of Starry Night and SkySafari. Follow Starry Night on Twitter @StarryNightEdu. Follow us @Spacedotcom, Facebook and Google+. Original article on Space.com