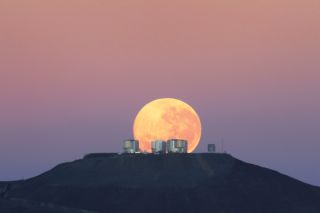 The full moon looks massive as it sets behind the Very Large Telescope in Chile's Atacama Desert, in this photo release on Jun 7, 2010. Why do observers report that the moon looks larger near the horizon than it does high in the sky? It may be nothing more than a trick of perspective.
(Image: © Gordon Gillet, ESO)

If you've ever seen the moon as it's just coming over the horizon, you may have wondered why it seems to look bigger than when it lies straight overhead. The answer may have more to do with the human brain than an external effect.

My own experience with this phenomenon happened over a half century ago, but I still have vivid recollections of it. I was spending a summer weekend at my Aunt Francie's house in Atlantic Beach, New York. My cousins and I were walking to the beach in the late afternoon when we noticed a group of people clustered on the corner of Kings Avenue and Ocean Boulevard, staring at something appearing off to their left. When we reached the corner, I was about to ask what everybody was looking at … and that's when I saw it for myself.

It was the nearly full moon. But this was no ordinary moon. [Watch: The Full Moon - Why It Happens]

Hanging low, just above the east-southeast horizon, this moon looked absolutely gigantic. Sort of like an oversized, mottled, orange-yellow beach ball. Now granted it wasn't of the same proportions as the moon Jim Carrey conjured up in the 2003 movie "Bruce Almighty," but the overall size of this moon from my childhood looked almost scary. "Has anybody ever seen the moon look this big before?" somebody in the crowd asked. Nobody had.

And yet just a half hour later, the moon had shrunk back to its normal size.

A vexing problem for millennia

What I had witnessed all those too many summers ago, I'm sure has been noticed by everyone at one time or another. For more than 2,000 years, astronomers, scientists, mathematicians and even philosophers, such as Kepler, Ptolemy, von Helmholtz and Aristotle, have observed and in some cases attempted to explain this strange phenomenon. And even today, scientists still attempt to come up with a definitive explanation of the cause of this "celestial inflation."

Aristotle (384-322 B.C.) offered the very first explanation, believing that light passing through the Earth's atmosphere in a horizontal direction acted like a magnifying lens and caused the phenomenon.

Claudius Ptolemy (A.D. 90-168) often made reference to the apparent variations in the size of the moon as it ascended from the horizon toward the zenith in his descriptions of various natural occurrences, though he never offered any specific explanation. The same held true for Johannes Kepler (1571-1630), who, like Ptolemy, observed the moon's changing size on many occasions. Kepler is best known for his laws of planetary motion, whichprovided one of the foundations for Isaac Newton's theory of universal gravitation. And yet he was apparently baffled by the changing size of the moon!

Physiology and optics may be the solution

Probably the best explanation as to why the moon appears to shrink in size when it's rising (or expand when it's setting) was put forward by two people.

Carl Friedrich Gauss (1777-1865), an astronomer who was also considered to be a master mathematician, proposed that the answer lay in the difference between the image perceived when the rising moon was viewed over a horizon, in which case nearby objects provided a sense of scale for the eye, and the image perceived when the eyes were raised to view the same object high overhead.

Later, Hermann von Helmholtz (1821-1894), a German physicist known for his mathematics of the eye, theories of vision and ideas on the visual perception of space, asserted more or less the same idea: that when the moon is seen directly above the horizon, our brains unconsciously assign to it a dimension comparable to nearby terrestrial objects.

Here's a simple experiment to try the next time you see an oversized moon. Get hold of a cardboard tube from, say, a roll of plastic wrap or aluminum foil. Now close one eye and with the other look at the seemingly enlarged moon near the horizon through the tube and immediately the moon will appear to contract to its normal proportions. Now close this eye and open the other one and suddenly the moon will snap back to its bloated appearance. The reason for this goes back to the explanations put forth by Gauss and later von Helmholtz: When looking through the tube your vision is restricted to a very small ring of sky around the moon and none of the neighboring trees or buildings along the landscape of the horizon are visible.

Even the constellations are subjected to this same illusion! Take the famous asterism we call the Big Dipper (known in Great Britain as "The Plough"). If you step outside this week as soon as it gets dark, look toward the northern horizon and there you'll see the Dipper sitting upright on the horizon and looking rather large. [How to Observe the Moon with a Telescope]

By 2 a.m., it's standing on its handle about halfway up in the sky and looks decidedly smaller and even smaller still as dawn breaks when it's almost overhead. Set your alarm clock for around 5:30 a.m. and see it for yourself.

Recently, my son, who is a high school physics teacher, and a colleague were driving back from a teacher's conference when they saw the full moon looking immense, hovering just above the horizon. My son's friend asked my son to pull over for a moment so that he could take a picture of the moon with his iPhone. However, that would do no good since the camera lens sees the moon as the same size whether it's sitting on the horizon or is high in the sky. Those images you've seen of a city skyline set against a giant moon were taken with a telephoto lens. When my son got home he queried me about the moon illusion, which was the basis for this column.

Incidentally, there are other explanations for why the moon seems to expand and contract.  Some use the Ebbinghaus or Ponzo illusions, both optical illusions of relative size perception to explain the phenomenon.  And if you scour the Internet, you will find a number of different articles and technical papers ─ some very lengthy ─ that delve deeply into this subject.

In fact, this is a subject that amazingly to this very day still has no definitive answer. As one researcher put it so succinctly: "Clearly, no theory has been fully accepted by the experts yet."