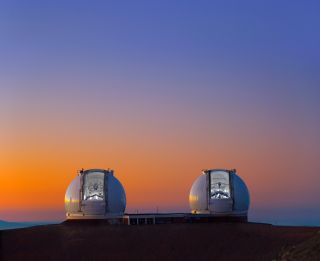 The sunny shores of Hawaii are currently hosting a small swarm of planetary scientists, who have gathered to discuss the most surprising and extreme planets that lie outside Earth's solar system.

The Extreme Solar Systems III conference, hosted by the American Astronomical Society, is the third meeting of its kind held since 2007, and has gathered about 350 scientists to the island of Hawaii. Coincidentally, the meeting falls on the 20th anniversary of the 1995 paper announcing the first-ever discovery of a planet orbiting a sunlike star outside Earth's solar system.

In a press conference yesterday (Dec. 1), a few of the scientists at the meeting told reporters about some of the topics being presented at the meeting. The scientists discussed a strange solar system with a planet orbiting its parent star 15 times further than Pluto orbits the sun, and theoretical work showing that two planets in one solar system could both have the potential to host life.[The Strangest Alien Planets]

The mystery of the fat Jupiter

A planet named HD 106906b is what some might call a fat Jupiter: It's 11 times more massive than the largest planet in this solar system. It also orbits its parent star at the incredible distance of 60 billion miles (97 billion kilometers), or 16 times farther than Pluto orbits the sun.

Such a hefty planet likely formed close to its parent sun, shortly after the star's birth, so how did HD 106906b get booted to the stellar suburbs? Paul Kalas of the University of California, Berkeley, and Abhijith Rajan of Arizona State University said they are starting to sketch a picture of what happened in this peculiar system, thanks to images taken with the Hubble Space Telescope and the Gemini Planet Imager. The images show signs that the system has been recently disturbed by something, perhaps a passing star.

The scientists also found a very thick ring of comets orbiting the star, not a strange occurrence by itself. But the comets loop around the star in a different plane than the massive planet, even though it's likely the planet and the comets formed from the same disk of material. The researchers said this further supports the hypothesis that a powerful gravitational force recently disrupted this system.

What is particularly interesting, the scientists said, is that the stellar system is very young (only 13 million years) and may have some similarities to Earth's solar system. Scientists have even hypothesized that large planets formed close to Earth's sun, and were ejected to the cold, dark reaches beyond Pluto, at some point in the solar system's early history.

Lisa Kaltenegger, director of the Carl Sagan Institute at Cornell University in Ithaca, New York, gave some commentary about this planetary system.

"What [Kalas] and [Rajan] found is a really interesting, oddball configuration," Kaltenegger said. "It's something that surprises scientists. We really don't know how this actually fits together. The cometary plane and the planetary object far away — how did they form? How did it come about?"

She added that it's a good thing when scientists are surprised, because "When we're surprised, we learn something."

Another Earth within reach

Earth lies in what scientists call the "habitable zone," a region of space where water can exist as a liquid on the surface of a planet. What would it be like if Venus or Mars were also in the habitable zone? What if an intelligent species evolved on one of those planets as well as on Earth?

Jason Steffen of the University of Nevada, Las Vegas, wanted to know if two planets orbiting in the habitable zone of their parent star would disrupt each other in any way that would hinder the formation of life. Would the gravitational pull of one planet cause major disruptions to the seasons on the other planet? Steffen and Gongjie Li, from the Harvard-Smithsonian Center for Astrophysics, published a paper showing that two Earth-like planets orbiting near each other could still support life, and would not cause significant disruption to each other's seasons.

Steffen presented the tantalizing picture of two intelligent alien species able to communicate with each other over the distance between their planets, long before either group had the ability to launch a rocket into space and meet the other one face to face.