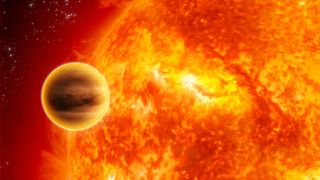 This year we celebrate the discovery of 51 Pegasi b in October, 1995. This giant planet is about half the size of Jupiter and orbits its star in about four days. '51 Peg' helped launch a whole new field of exploration.
(Image: © NASA/JPL-Caltech)

Humanity's understanding of its place in the universe began changing in a big way 20 years ago this month.

On Oct. 6, 1995, Michel Mayor and Didier Queloz of Switzerland's Geneva Observatory announced the discovery of the huge, scorching-hot 51 Pegasi b, the first alien planet ever found around a sunlike star.

The first exoplanets of any type were spotted in 1992 by astronomers Aleksander Wolszczan and Dale Frail, who found two worlds circling a fast-rotating stellar corpse called a pulsar. As monumental as this discovery was, the 51 Peg b announcement perhaps resonated even more, since pulsars are a far cry from "normal" stars like Earth's sun. [The Strangest Alien Planets]

The new field of exoplanet science has progressed rapidly in the last two decades: Astronomers have now confirmed the existence of nearly 2,000 planets beyond our own solar system. (The exact number varies depending on which database is consulted.)

More than half of the confirmed finds come courtesy of NASA's Kepler space telescope, which launched in March 2009 on a $600 million mission to determine how commonly Earth-like planets occur throughout the Milky Way galaxy.

Kepler has also spotted more than 3,600 additional planet candidates, about 90 percent of which will eventually be confirmed by follow-up analysis or observations, mission scientists say.

But Kepler's success goes beyond the raw numbers. The spacecraft's data suggest, for example, that every star in the Milky Way hosts at least one planet on average, and that about 20 percent of sunlike stars harbor a potentially habitable, relatively Earth-like world.

The next 20 years should bring more big leaps in exoplanet science. For example, NASA is set to launch the Transiting Exoplanet Survey Satellite (TESS) in 2017 and the $8.8 billion James Webb Space Telescope the next year.

TESS should find a number of relatively nearby exoplanets whose atmospheres JWST can scan for oxygen, methane and other possible signs of alien life, NASA officials say. (Most of Kepler's discoveries are too distant to probe in such a fashion.)

In the mid-2020s, NASA may also launch a space-telescope mission called WFIRST (Wide-Field Infrared Survey Telescope)-AFTA, which would search for and characterize alien planets in addition to tackling other big astronomy questions, such as the nature of mysterious dark energy.

ESA also plans to launch a new space mission in the 2024 timeframe called Plato, which should discover and characterize many rocky, potentially habitable exoplanets close to Earth's cosmic neighborhood.

And not all the exoplanet action will be happening in space. Three huge ground-based telescopes are scheduled to come online in the mid-2020s — the Giant Magellan Telescope (GMT), the Thirty Meter Telescope (TMT) and the European Extremely Large Telescope (E-ELT). GMT and the E-ELT will operate from Andean mountaintops in Chile, while TMT is being built atop Hawaii's Mauna Kea volcano.

All three megascopes will perform a broad range of astronomical observations that includes exoplanet exploration.

The huge leap exoplanet scientists — and many scientists of all stripes — are hoping for, of course, is the discovery of life beyond Earth. Queloz thinks it's going to happen.

"There will be the discovery of life on some of these planets later on," Queloz told the BBC last month. "It won't be me; it will be others. But in a way, I have stepped into this."