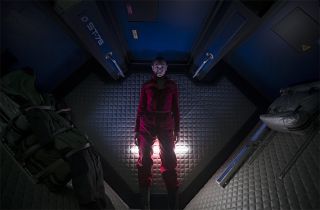 As I get older, I’m getting increasingly cynical about the quality of science fiction shows and movies. Sure, there’s always the various “Star Trek” series’ that keep me entertained and the occasional movie gem like “The Martian,” but there are few that combine the perfect measures of plot, characterization, science and visual effects. Often I find myself suspending my disbelief for an inordinate amount of time, or I notice that basic tenet of “connecting with he characters” is completely missed.

So I was cautiously intrigued when I heard that “The Expanse” science fiction book series had been adapted for a TV audience. Then I saw the pilot in a special advanced screening and… wow.It’s really good.

And by “really good”, I mean that it is as excellent as a blend between the “Battlestar Galactica” reboot and "Stargate: Universe", with the potential to excel beyond. It’s sharp, it’s sexy, it’s gritty; it’s exactly what I’ve been waiting for in a modern sci-fi show.

Warning: Some minor spoilers ahead…

If you’re familiar with the book series written by Daniel Abraham and Ty Franck, you’ll know that “The Expanse” universe is set in the 23rd Century. Humanity has spread beyond Earth to set up colonies on the moon and Mars. Also, realizing the vast bounty of resources in the asteroid belt, we’ve pushed further into the solar system, exploiting the asteroids for their precious materials, principally water.

Earth and the moon comes under the jurisdiction of the United Nations, whereas Mars is an independent military colony. The asteroid belt is populated by the downtrodden “Belters” who resent being exploited by the “Earthers” and “Dusters” — the populations of Earth and Mars, respectively. There is social unrest and political distrust between the three groups.

Right from the beginning of the pilot episode we are thrown into the thick of the story: a missing daughter from a rich lunar family; the troubled detective, based in the colony on massive asteroid Ceres, who is tasked to track down her down; a crew on board a hulking ice trawler spaceship called the Canterbury near Saturn; a UN diplomat who appears, from the outset, to be kind and mild mannered, only to find she has a brutal side. You immediately have a feeling that each plot line is related and I became excited for the clues as to when and where they might intersect.

Instantly I related to the characters who’s actors all put on an A+ performance. From the reluctant second officer on board the Canterbury, who is having an affair with one of his subordinates, wrestling with whether or not to “do the right thing” when a distress signal is received (but his captain decides to ignore, lest the crew lose their early space ice delivery bonus at Ceres) to the detective battling with alcoholism who spends his time trying to turn a blind eye to obvious corruption — there’s a depth to the characters that immediately hooks you.

If that wasn’t enough, science is front and center and the writers, Mark Fergus and Hawk Ostby (of “Children of Men” and “Iron Man” fame), have done something awesome and made many aspects of living in space a central theme to the plot. The big one is muscle atrophy and bone density loss, afflictions that the Belters, in particular, have to live with and are stigmatized for. “Space madness” even rears its ugly head when the Canterbury’s executive officer becomes reclusive and starts talking to his plants.

And, yes, there’s a heavy nod to the mechanics of space sex.

PHOTOS: The Science and Fiction of ‘Oblivion’

“The Expanse” uses science to further the story, rather than treating science as a barrier to be ignored. For example, the zero-gravity (and multi-G acceleration) sequences are some of the best I’ve seen on screen. Even the movie “Gravity”, which was just a rollercoaster ride of scientific shortcuts and breathless action, can’t compete with the well thought out sequences on show in “The Expanse.” Sure, the show takes occasional leaps into fantasy, but it’s not enough to dilute the story or science content.

Like all good sci-fi, there’s an underlying message, and from the grimy habitats of Ceres to the torture of a suspected Belter terrorist, The Expanse has taken a note from Battlestar Galactica’s playbook by examining a totalitarian theme and the social injustices that come with it.

But this all leads to the mother of all cliffhangers that is as mysterious as it is shocking, making the viewer realize that every cast member, no matter how much you like them, is expendable.

I’m already a fan and can’t wait to see where the story takes us.

Two episodes of The Expanse are scheduled to premier on Syfy Channel on Dec. 14 and 15 and will run for 10 episodes, but the first episode will be available on demand from Nov. 23.