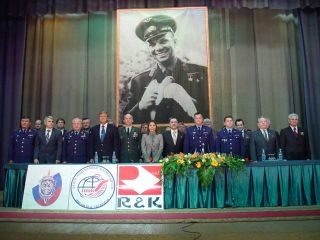 NASAastronaut JeffWilliams is glad to be back on Earthwith his family, friends and some long-sought peace and quiet after six monthsaboard the InternationalSpace Station (ISS).

"Sixmonths, as you know, is a long time to be on orbit and away from family andfriends," Williams said in an interview. "It's very good to be back on Earth."

"It was anhonor to be onboard the space station during that time," Williams said."Obviously, there were a lot of key milestones met."

Amongthose, Williams said, was the success of NASA's second post-Columbia accidentmission, STS-121 in July, which deliveredEuropean Space Agency astronaut ThomasReiter to the ISS, bumping the station's population back up to athree-person crew. Less than two months later, NASA's STS-115crew aboard the Atlantis shuttle arrivedto add a pair of newportside trusses and solararrays to the orbital laboratory.

"It's astartlingly different configuration now with the additional solar arrays,"Williams said as he recalled his last look at the ISS from his departingSoyuz spacecraft. "I jokingly said it borders on ugly right now, so we haveto complete the assembly to get the other side to look the same."

Constructionof the space station stalledafter the 2003 Columbiaaccident as NASA worked to recover from the loss of the shuttle and its astronaut crew. But after two testflights and one successful ISS assembly mission, the $100 billion project is oncemore underway as NASA prepares for the Decemberlaunch of its Discovery shuttle's STS-116mission.

"Every stepis important," Williams said when Discovery rolledout to NASA's Florida launch pad Thursday. "We want to get all thelaboratory modules up three and we want to increase [the station] to a crew ofsix. We need the shuttle to do that."

A briefemergency aboard the ISS in September, prompted by an overheating oxygengenerator and chemicalleak, proved the value of station crew training to Williams when he and hisExpedition 13 crewmates responded.

"I thinkdue to the training and the procedures, we went through the response notwithout thinking about it, but in a very methodical and logical way that savedthe situation fairly early," he said.

A colonelin the U.S. Army, Williams served as NASA's ISS science officer during theExpedition 13 mission and performed a host of experiments. One such project,dubbed SPHERES,tested the ability of two free-flying satellites to determine their position inspace.

But orbital photography,it seems, was Williams' forte. The astronaut set an all-time record for themost photographs taken during an ISS expedition. During Expedition 13, Williamssnapshots of Earth, space and the ISS pushed the station's total photographoutput past the 240,000 mark.

"I didn'tset out to try to capture any records," Williams told SPACE.com, adding that orbital photography was one-part hobby andone-part travelogue to remember his mission. "I learned from my first flightthat really, when you come back, the most important thing that you have are thepictures and video."

One photosession in particular, in which Williams caught thebrief eruption of the Aleutian Islands' Cleveland volcano in May standsout.

"There areso many high points in six months," the astronaut said, adding that Cleveland'seruption was one of those unique moments. "It was a very short eruption,probably a bit longer than an hour, and was very exciting."

WithExpedition 13 complete, Williams has racked up 193 days of orbital living andspent more than 19 hours working outside inside a spacesuit during three careerspacewalks. About 10 of his orbital days were spent during NASA's STS-101shuttle flight aboard Atlantis.

"On thespace station, as you know, you have continuous fans and pumps running, andsome of these are louder than others," said Williams, adding that even the dinof recovery crews on landing day on the steppes of Kazakhstan amounted to awhisper in his ears after Expedition 13. "For six months, not being able to getaway from that noise, I really missed that."

Williamsmissed his family, wife Anne-Marie and two sons, more however, and is eagerlysettling back into life moored to his home planet.

"Right now,we want to get our life back in order," Williams said. "I'll be working onthings in the house that need to be worked on."

After that,he added, he'll think about what will follow his orbital trek.