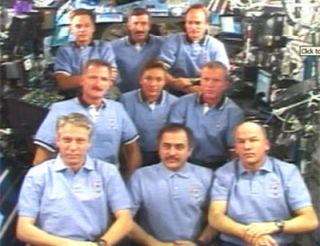 The spacestation's Expedition13 crew and NASA's six-astronaut team on Atlantis' STS-115 spaceflight tooka certain satisfaction in the smooth success to date of their mission to jumpstart construction of the orbital laboratory.

"It's veryexciting to see the station assembly kick back into high gear," STS-115 missionspecialist Daniel Burbank during a joint press conference aboard the ISS. "We'reall very anxious to see how the future flights go along."

NASA's STS-115mission, commanded by veteran shuttleastronaut Brent Jett, has delivered newsolar arrays and a 17.5-ton pair of portside trusses to the ISS, markingthe first new segment to the ISS since late 2002. Construction of the orbitallab stalled as NASA recovered from the 2003 Columbia accident andreturned its three-orbiter fleet to flight.

Three busyspacewalks and eight days into their busy 11-day mission, the joint ISS andSTS-115 astronaut crews have unfurleda 240-foot (73-meter) pair of power-generating solar wings and its vitalradiator. The crew had ahalf-day off this morning.

"I thinkthe successful deployment of the arrays marked the success, in our terms, ofour mission," STS-115 mission specialist Joseph Tanner said. "There are a lotof things that had to go right for that to happen."

Vinogradovand Williams will leave a larger ISS when they undock on Sept. 28 than the onethey arrived at on April 1.

"We've gonethrough some very significant milestones during Expedition 13," Williams said. "It'sa great thing and a great honor to have participated in them."

One remainingjob for the both ISS and STS-115 astronauts is the packing of cargo that willleave the orbital laboratory aboard Atlantis early Sunday.

NASAofficials said the Atlantis crew will return about 1,000 pounds (453 kilograms)of equipment, including a set of cold bags filled with biological specimensfrom the space station's Minus Eighty Laboratory Freezer for ISS (MELFI), asuitcase-sized materials exposure experiment that spacewalkers retrievedfrom the ISS exterior on Friday and the space suits used during the threeSTS-115 spacewalks.

According to the crew's Flight Day Eight execute package, they are also returning about 78 pounds (35 kilograms) of clothing belonging to Vinogradov and Williams.

"This iswhat I'd describe as an incidental transfer," Dye said, adding that there isonly a limited amount of space in Atlantis' middeck for cargo.

Earliertoday, Vinogradov also shut the hatch on a disposable Russian cargo ship thatwill be jettisoned from the ISS once Atlantis leaves. Packed with trash andunneeded items, the Progress21 supply ship will undock from the space station's Russian-built Zvezdaservice module Monday at 8:28 p.m. EDT (0028 Sept. 19 GMT) and ultimately burnup in the Earth's atmosphere.

Dye saidshuttle astronauts will also transfer about 90 pounds (40 kilograms) of oxygen fromAtlantis to the ISS.

NASAofficials said the Atlantis crew will have transferred about 1,000 pounds (452kilograms) of water - a byproduct of the orbiter's three fuel cells - to theISS before undocking.