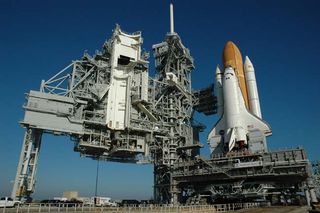 The space shuttle Discovery is settled on its Launch Pad 39B for launch of mission STS-116. Work crews hauled the orbiter and its launch stack to Pad 39B on Nov. 9, 2006 for a Dec. 7 launch.
(Image: © NASA/Amanda Miller.)

NASA's shuttle Discovery made the slowjourney to its Florida launch pad early Thursday as engineers prepare thespacecraft for a December flight to the International SpaceStation (ISS).

Discovery is poisedto launch towards the ISS with its STS-116astronaut crew on Dec. 7 at 9:35:42 p.m. EST (0235:42 Dec. 8 GMT), the agency'sfirst night flight in four years. Discovery's STS-116 mission managers decidedtoday not to push Discovery's planned launch ahead one day to Dec. 6, NASAspokesperson Kyle Herring, at the Johnson Space Center in Houston, told SPACE.com.

NASA shuttle programmanager Wayne Hale saidMonday that a Dec. 6 launch was a possibility because Discovery's flightpreparations were ahead of schedule. An earlier launch opportunity would also provideadditional padding to fly the STS-116 mission before the end of 2006, sinceNASA's 1970s-era space shuttle computers werenot designed to fly through a year-end rollover, Hale added.

In order tofly the STS-116 mission before the end of the year, NASA must launch Discoveryand its crew by Dec. 18 or so or wait for another launch opportunity inJanuary. Hale said a potential software fix is in the works--and in fact hasbeen certified for use in emergencies--but a final decision on Discovery'slaunch window deadline is still pending.

"There was nodiscussion about the back end of the window," Herring said. "That will bediscussed at the Flight Readiness Review."

Commandedby veteran shuttle flyer MarkPolansky, Discovery's STS-116mission is expected to add a new pieceof structure to the ISS framework and rewire the station's electrical gridduring a series of three spacewalks. The 12-day spaceflight will also ferry NASAastronaut Sunita Williams to the ISS, where she expects to join theoutpost's Expedition14 crew as a mid-mission replacement for European Space Agency spaceflyer ThomasReiter.

"At thisstage, every mission is critical, every mission depends on the success of itspredecessor," Polansky told reporters this week, adding that his crew has spentyears training for the upcoming mission. "We've certainly known each other inthis [Astronaut] Office for a long time and feel like we are ready to go."

"Sometimesit just takes a little longer than expected with all the jacking and levelingof the crawler," Jessica Rye, a NASA spokesperson at KSC, told SPACE.com.

Altogether,a shuttle, its boosters, tank and launch platform weigh about 17.5 millionpounds (7.9 million kilograms). The crawler is also equipped with a series ofjacks and levels to NASA shuttles stable during the 4.2-mile (6.7-kilometer)drive to the launch pad and moves at top speed of a cool one mile per hour (1.6kilometers per hour), NASA has said.

WithDiscovery at its Pad 39B launch site, all the pieces are now in place for theSTS-116 mission. The shuttle's cargo--the Port 5 (P5) spacer-like truss segment[image],ISS tools and spare parts, as well as a pressurized SPACEHAB cargo pod thatconnects via a tunnel to Discovery's airlock via a tunnel--arrived at the launchpad on Tuesday.

Thecargo will soon be loaded into Discovery's payload bay. Polansky and hisSTS-116 crewmates are expected to head to KSC on Nov. 13 for a standardmulti-day launch training session that ends with the traditional a mockcountdown on Nov. 16.