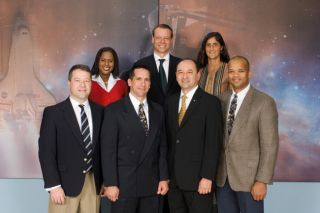 These seven astronauts assigned to the STS-116 mission, having just met the press, pose for a portrait at the Johnson Space Center. In front, left to right, are astronauts Nicholas Patrick, William Oefelein (pilot), Mark Polansky (commander) and Robert Curbeam. In the back are, left to right, astronauts Joan Higginbotham, Christer Fuglesang and Sunita Williams.
(Image: © NASA.)

HOUSTON - Seven astronauts are just onemonth away from rocketing towards the International SpaceStation (ISS) aboard NASA'sDiscovery orbiterand are eagerly awaiting their orbital construction mission.

Polanskyand his STS-116 crew are setto launch towards the ISS on Dec. 7 at 9:35:42 p.m. EDT (0235:42 Dec. 8GMT) to deliver a new piece of the ISS, rewire the orbital laboratory'selectrical grid and activate the station's primary cooling system.

"I can'twait to see the smiles on the faces of five people being on orbit for the firsttime," Polansky said, adding that the mission has been a longtime coming forrookies like Fuglesang, who joined the ESA astronaut ranks in 1992. "There arepeople who have waited a very long time."

The STS-116mission will mark NASA's third shuttle flight of 2006--the second this yeardedicated to ISSconstruction--and is the first mission since the 2003 Columbia accidentscheduled to launch at night. NASA's first three post-Columbia accidentmissions each launched in daylight to allow a clear view of any debris shed byshuttle external tanks.

But afterNASA's successful summer daylight launches of Discovery and Atlantis during theSTS-121and STS-115missions, respectively, with acceptable fuel tank performances, the spaceagency and its astronauts are again ready to press ahead with night spaceshots. In-flight orbiter heatshield inspections are now standard, lending more confidence to NASA'sability to detect any shuttle damage that may occur from debris shed during a nightlaunch, mission managers said.

"Day,night, dusk or dawn, it just doesn't matter to a flight engineer," saidCurbeam, who will aid Polansky and Oefelein during the eight and a half minute launch intospace. "All that matters to me is that the gauges are lit well enough to seewhere they are."

Curbeam andseveral other STS-116 crewmembers originally expected to launch their missionin mid-2003, but were delayed following the loss of Columbia and its seven-astronaut crew. Sincethen, NASA has made extensive shuttle and fuel tank safety enhancements andlaunched three orbiter flights since its STS-114 return to flight in 2005. Thespace agency plans at least 14 more orbiter flights to complete the ISS bySeptember 2010, when it plans to retire its three-orbiter fleet.

"I don'tever consider it business as usual. What we do is very hard, it's difficult,"said Higginbotham, who has waited about 10 years for her first spaceflight."But it is good to see us back launching shuttles more routinely than we havefor the last two years."

No lessthan three spacewalks are planned during STS-116, during which spacewalkerswill help install a new Port 5 truss spacer segment to the portside end of theISS, plug the outpost into its primary electrical grid and activate a longdormant cooling system. The astronauts are also hauling a series of spare partsand other cargo to the ISS inside Discovery's cargo bay.

Discoveryis also ferrying Williams, who will work alongside Curbeam in the third STS-116spacewalk, to the ISS, where she will relieve Expedition 14 flight engineerThomas Reiter and take his place as a member of the station's crew. She willjoin Expedition 14 commander Michael Lopez-Alegria and flight engineerTyurin--who arrived at the ISS in September--than stay on as part of thestation's Expedition 15 mission.

"I reallywish they could all stay with me up there," Williams said of her STS-116crewmates. "But we'll be in touch."