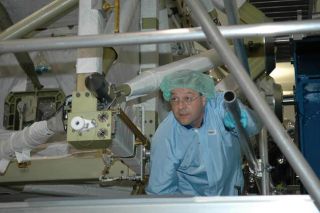 In the Space Station Processing Facility, STS-116 Mission Specialist Nicholas Patrick moves in close for a better look at the port integrated truss structure, P5, which is the primary payload on the mission on Oct. 12, 2006.
(Image: © NASA/Kim Shiflett.)

CAPE CANAVERAL - It's relatively small. It's boxy.It's the least impressive of the girders that make up the metallic backbone ofthe InternationalSpace Station, which ultimately will stretch the length of a football fieldin orbit.

But the prime payload forNASA's next station construction mission is considered vital to the agency'splans to complete assembly of the outpost before a September 2010 deadline setby President Bush.

"It's critical becausewithout it, we can't continue the building of the space station," ChuckHardison, site manager for The Boeing Co. at Kennedy Space Center, said Friday."So important things come in small packages."

Set for launch aboard shuttle Discovery around Dec. 7,the so-called P-5 Short Spacer [image]will serve as a bridge between segments on the left side of the station's11-piece central truss.

It's 11 feet long , 14 feetwide and 14 feet tall -- or about one-quarter of the size of the massivetruss segment erected at the outpost by a stationconstruction crew in September.

Relatively small at 4,110pounds, the segment is 15 tons lighter than the most recently added girder.

But without it, there wouldbe no way to route electrical power, computer commands and coolant betweenportside segments of truss, which provides an orbital foundation for outpostscience labs, solar wings, radiators and spare parts platforms, among otherthings.

The February 2003 Columbia accident brought station construction to a halt about midway through the job.Assembly resumed last month with the delivery and installation of the newportside truss segment.

NASA plans to launch anadditional 14 shuttle missions to completeconstruction. The upcoming flight -- and three after it -- primarily aimedat finishing enough of the truss to add long-awaited European and Japanesescience labs to the outpost.

"This mission is abridge to our future assembly operations," said NASA payload managerDeborah Hahn. "Hopefully, this will be continued success with theassembly."

Published under licensefrom FLORIDATODAY. Copyright ? 2006 FLORIDA TODAY. No portion of this material may bereproduced in any way without the written consent of FLORIDA TODAY.