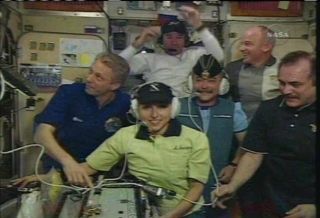 The Expedition 13 crew welcomes Expedition 14 and spaceflight participant Anousheh Ansari aboard the International Space Station. The station's new residents arrived at the station on Wed., Sept. 20, two days after blasting off from Kazakhstan.
(Image: © NASA TV)

The toxic chemical leak that caused a brief scare on the International Space Station (ISS) earlier this week is under control and the malfunctioning oxygen generator responsible for it will be replaced shortly, astronauts aboard the orbital laboratory said today.

Speaking to reporters from the space station, Expedition 13 flight engineer Jeffry Williams said that at no point during the emergency was the crew especially worried.

"I think we knew that there was something wrong and we reacted the way we've been trained, to isolate the problem and to safe the situation with the help of the ground," Williams said. "We never thought that we were anywhere near the point of having to go to the Soyuz. We just executed the procedures and it all worked out great."

Earlier this week, the station's three-astronaut Expedition 13 crew reported a smoke-like smell in the laboratory's Russian-built Zvezda service module. The smell was later tracked to a leak in the station's Elektron oxygen generator, which separates water into hydrogen and oxygen. The generator is currently shut down and the crew plans to replace the defective main unit in the instrument tomorrow, said Expedition 13 commander Pavel Vinogradov.

"At this time we have switched it off, it's not functioning at the moment and we don't see any problems," he said.

Happy to have new company

Also present at the news conference to talk about their experiences was German astronaut Thomas Reiter, who has been aboard the ISS since July, and new station crewmembers Expedition 14 commander Michael Lopez-Alegria and flight engineer Mikhail Tyurin, as well as Anousheh Ansari, the world's fourth space tourist and the first woman to pay an estimated $20 million to visit the orbital laboratory.

Lopez-Alegria, Tyurin and Ansari arrived at the station on Wednesday, two days after launching from Kazakhstan inside a Soyuz TMA-9 spacecraft on Monday.

Reiter said the space station is running much more smoothly now than when he first arrived aboard Discovery as part of STS-121.

"When I first got here with 121, I perceived it to be much more hectic," Reiter said. "From a different perspective as a crewmember, I found it ran smooth."

Reiter also said he was excited for the new company. "It's really fun to have them," he said. "At the moment of course, in certain places, it's a little bit more tighter but we all get our work done and we're enjoying our time, the six of us, here in space."

Williams was likewise excited about the new arrivals, but for a different reason. "We especially liked their arrival because it's our way home," he said. "We're ready to go home after six months here."

Besides family and friends, Williams said the things he misses most about Earth are the things we usually take for granted. "One of them is quiet, complete quiet. Not having fans continually blowing and pumps going continually. The smell of fresh air, and the smells we normally get in fresh air-the smell of trees and flowers and grass and all that."

Asked what she was doing to keep busy while up in the station, Ansari quipped "ironing and cooking." She then explained that she was conducting a series of biomedical experiments in collaboration with the European Space Agency and also checking in with her office back on Earth.

"It's wonderful. The technology up here is like I've never left Earth," the Iranian-American buisnesswoman said. "Of course, I'm trying to make the most of my eight days up here and not work too hard."

Ansari confirmed reports that she experienced space motion sickness and other symptoms including headaches and back pains during her two-day Soyuz flight to the station.

Fortunately, her experience on board the station has been much better. "It's been more than what I expected and I'm enjoying every single second of it," she said. "The entire experience has been wonderful up here and the response I'm getting on Earth has been pretty wonderful also."

Besides email, Ansari has also been keeping a blog of her experience, which the public can view and leave comments on.

During the teleconference, Ansari talked about her favorite part of the trip so far. "The favorite moment as I suspected was seeing the Earth for the first time... It's a moment I will never forget."

Ansari elaborated more in her blog: "Here is this beautiful planet turning graciously about itself, under the warm rays of the Sun...so peaceful...so full of life...no signs of war, no signs of borders, no signs of trouble, just pure beauty...How I wish everyone could experience this feeling in their heart, specially those who are at the head of the governments in the world."