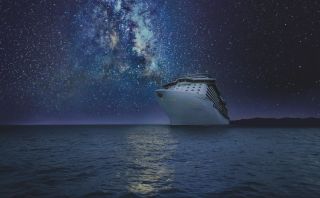 If a cruise vacation is your cup of tea, why not add som science to your trip? Princess Cruises and Discovery Channel have paired up to make science-themed cruises called Discovery at Sea that include activities like stargazing from locations on the open ocean, far from city lights.
(Image: © Princess Cruises)

A new line of science-themed cruises lets passengers stargaze from the open ocean, a unique location far away from city lights.

Princes Cruises and Discovery Channel have created a line of science-themed cruises called "Discovery at Sea." The excursions feature activities like diving with sharks, spending time with exotic wildlife, looking at auroras and stargazing.

Viewing the night sky from a location far away from city lights can be a magical experience, but it usually requires traveling to very remote locations (which, for some people, is part of the fun). But stargazing on a cruise ship is unique, because the vessel can travel to locations completely devoid of light pollution, and yet viewers are never more than a few steps away from the ship's accommodations. [Stargazing Tips for Amateur Astronomers]

The stargazing sessions are held on "sea nights" when the ship is far from a port. An onboard "Stargazing Specialist" leads the sessions, pointing out constellations and cosmic phenomena, and answering questions.

For the cruise program, he helped develop the "tour of the sky" that is presented to passengers, he told Space.com. In addition, he recorded a series of exclusive video talks about various astrophysics topics that are available for passengers to watch in their rooms.

At a promotional event for the new cruise line held in New York City, Oluseyi told Space.com that a cruise provided the opportunity to see parts of the sky or cosmic features that might not be visible from the passenger's home location. This includes auroras, which are sometimes visible from the Alaska tours.

"The other thing you can get from a cruise is access to both hemispheres," Oluseyi told Space.com. "The night sky is amazing no matter where you are in the world, but what's really cool is that it changes from place to place."

In the Southern Hemisphere, the band of the Milky Way is straight overhead, rather than slightly off to the side, as it is in the Northern Hemisphere. So viewers from the northern half of the world can see "star clusters and nebula that you wouldn't normally be able to see," he said.

Stargazing nights are available on all Discovery at Sea cruises. More information is available at the program's website.