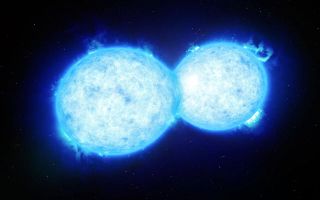 An artist's impression of the hottest and most massive contact binary system, where the two similarly sized stars share material.
(Image: © ESO/L. Calcada)

It's a make-out session on a cosmic scale: Two incredibly hot stars, spinning in a tight orbit around one another, appear to be "kissing." The stellar pair are so close together that their surfaces overlap, creating a bridge between them.

The smooching stars are two of the hottest and most massive overlapping double stars ever identified, according to new research. Catching two stars in this phase of life is "extremely rare," the European Southern Observatory (ESO) said in a statement, because the stars don't remain in this state for long. Check out this video from Space.com describing how the stars might meet their demise.

Known collectively as VFTS 352, the enormous stars provide a rare look at the mixing of material from two different stellar sources, said Leonardo Almeida, at the University of São Paulo, Brazil, and lead author of a study that identified the unusual pair. "As such, it's a fascinating and important discovery," he said in a statement. [Supernova Photos: Great Images of Star Explosions]

When two double stars orbit one another close enough that they share their components, they are known as "overcontact binaries," according to the statement from the ESO. Only a handful of this unusual class of stars has been identified, primarily because they inhabit this step of evolution for a brief span of time in their overall lifetimes.

Of these, VFTS 352 is the earliest-type, hottest and most massive overcontact binary known, with a combined mass of about 57 times that of the sun and surface temperatures above 40,000 degrees Celsius (72,000 degrees Fahrenheit), according to the new research paper. The kissing stars were spotted using the European Space Observatory's Very Large Telescope (VLT).

Located about 160,000 light-years away from Earth, in the Tarantula Nebula, the two stars in VFTS 352 orbit each other in just over one Earth day. The stellar cores are only about 7.5 million miles (12 million kilometers) apart, so close that their surfaces overlap, forming a bridge between the two.

Unlike their cousins, "vampire binaries," which have one smaller star sucking material from its larger neighbor, VFTS 352 contains two stars of almost identical size. Instead of one star stealing material from the other, the pair may share as much as 30 percent of their components.

It remains uncertain what will happen to the unlikely pair, but their future will definitely be cataclysmic. In one scenario, the two stars may merge to create a single, rapidly rotating, highly magnetic, gigantic star. This merger, the researchers say, would produce an incredible cosmic fireworks show.

"If it keeps spinning rapidly, it might end its life in one of the most energetic explosions in the universe, known as a long-duration gamma-ray burst," Hugues Sana, of the University of Leuven in Belgium, said in the same statement. Sana was the lead scientist of the VLT FLAMES Tarantula Survey, which identified the exotic pair in the process of studying over 900 stars in the Large Magellanic Cloud, a dwarf galaxy located just outside the Milky Way (earning it the title of "satellite galaxy").

In a second scenario, the two stars would "both remain compact, and the VFTS 352 system may avoid merging," said the team's lead theoretical astrophysicist Selma de Mink, of the University of Amsterdam. "This would lead the objects down a new evolutionary path that is completely different from classic stellar evolution predictions."

In this case, said de Mink, the stars would end their lives in supernova explosions, producing a pair of closely orbiting black holes. If scientists can catch this event as it is happening, it provide an observational breakthrough for stellar astrophysics, because it would likely produce gravitational waves. These ripples in space-time are generated by extreme variations of strong gravitational fields, and are predicted by Einstein's theory of gravity, but have never been directly observed.

The research was published online in the Astrophysical Journal.