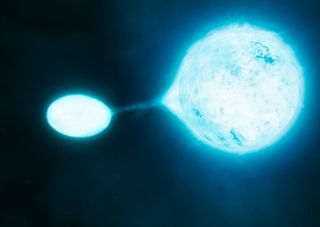 A surprising number of massive stars in our Milky Way galaxy are part of close stellar duos, a new study finds, but most of these companion stars have turbulent relationships — with one "vampire star" sucking gas from the other, or the two stars violently merging to form a single star.

Astronomers using the European Southern Observatory's Very Large Telescope in Chile studied massive O-type stars, which are very hot and incredibly bright. These stars, which have surface temperatures of more than 54,000 degrees Fahrenheit (30,000 degrees Celsius) live short, violent lives, but they play key roles in the evolution of galaxies.

The researchers discovered that more than 70 percent of these massive stars have close companions, making up so-called binary systems in which two stars orbit each other.

While this percentage is far more than was previously expected, the astronomers were more surprised to find that majority of these stellar pairs have tumultuous relationships with one another, said study co-author Selma de Mink, of the Space Telescope Science Institute in Baltimore.

"We already knew that massive stars are very often in binaries," de Mink told SPACE.com. "What is very surprising to us is that they're so close, and such a large fraction is interacting. If a star has a companion so close next to it, it will have a very different evolutionary path. Before, this was very complicated for us to model, so we were hoping it was a minority of stars. But, if 70 percent of massive stars are behaving like this, we really need to change how we view these stars." [Top 10 Star Mysteries]

"These stars are absolute behemoths," study lead author Hugues Sana, of the University of Amsterdam in the Netherlands, said in a statement. "They have 15 or more times the mass of our sun and can be up to a million times brighter."

These massive stars typically end their lives in violent explosions, such as core-collapse supernovas or gamma-ray bursts, which are so luminous they can be observed throughout most of the universe.

For the new study, the astronomers analyzed the light coming from 71 O-type stars — a mix of single and binary stars — in six different star clusters, all located roughly 6,000 light-years away.

The researchers found that almost three-quarters of these stars have close companions. Most of these pairs are also close enough to interact with one another, with mass being transferred from one star to the other in a sort of stellar vampirism. About one-third of these binary systems are even expected to eventually merge to form a single star, the researchers said.

The results of the study indicate that massive stars with companions are more common than was once thought, and that these heavyweights in binary systems evolve differently than single stars — a fact that has implications for how scientists understand galaxy evolution.

"It makes a big difference for understanding the life of massive stars and how they impact the whole universe," said de Mink.

Big stars with a big impact

Type O stars make up less than 1 percent of the stars in the universe, but they have powerful effects on their surroundings. The winds and shocks from these stars can both trigger and halt star formation processes, the researchers said.

Over the course of their lives, culminating in the supernova explosions that signal their death, these massive stars also produce all the heavy elements in the universe. These elements enrich galaxies and are crucial for life.

But for massive stars in close binary systems, the interactions between the pair impact the evolution of both stars.

With vampire stars, the lower-mass star sucks fresh hydrogen from its companion, substantially increasing its mass and enabling it to live much longer than a single star of the same mass would, the researchers explained. The victim star, on the other hand, is left with an exposed core that mimics the appearance of a much younger star.

These factors could combine to give researchers misleading information about galaxies and the stars within them.

"The only information astronomers have on distant galaxies is from the light that reaches our telescopes," said Sana. "Without making assumptions about what is responsible for this light, we cannot draw conclusions about the galaxy, such as how massive or young it is. This study shows that the frequent assumption that most stars are single can lead to wrong conclusions."

The researchers report their findings in the July 27 issue of the journal Science.