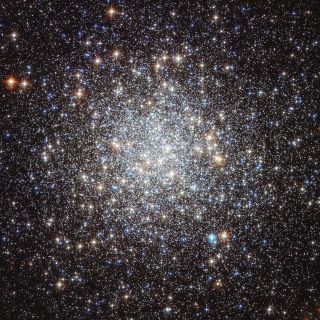 Hundreds of thousands of glittering stars shine in a cluster at the center of our galaxy in a new photograph from the Hubble Space Telescope.

The cluster is called Messier 9, and contains hordes of stars swarming in a spherical cloud about 25,000 light-years from Earth. The object is too faint to be seen with the naked eye, and when it was discovered by French astronomer Charles Messier in 1764, the scientist could only resolve it as a faint smudge that he classified as a nebula ("cloud" in Latin).

Now, though, the Hubble Space Telescope is powerful enough to make out more than 250,000 individual stars in Messier 9, in a new picture released today (March 16). The bluer points indicate hotter stars, while the redder stars are cooler.

Messier 9 is what's known as a globular cluster, containing some of the oldest stars in the galaxy in a clump that is thought to have formed together when the universe was much younger. These stars, which are about twice as old as the sun, are made of different materials than our star. They tend to lack the sun's heavier elements, such as oxygen, carbon and iron, which were only present in larger quantities when the universe was older.

Hubble's new photo is the most high-resolution image ever taken of Messier 9, and reveals the ancient cluster as never before. So many details of the stars are visible, despite the fact that the whole image spans an area no bigger than the size of the head of a pin held at arm's length.

The more than 20-year-old Hubble Space Telescope launched on April 24, 1990. Since then, it has been visited five times by space shuttle crews for repairs and upgrades, and is still in great shape, scientists say.