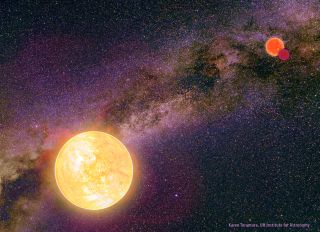 The widest binaries and triple systems have very elongated orbits, so the stars spend most of their time far apart. But once in every orbital revolution they are at their closest approach.
(Image: © Artist's impression by Karen Teramura (UH Institute for Astronomy), background photograph by Wei-Hao Wang)

Exoplanets circling a star with a far-flung stellar companion — worlds that are part of "wide binary" systems — are susceptible to violent and dramatic orbital disruptions, including outright ejection, the study found.

Such effects are generally limited to sprawling planetary systems with at least one distantly orbiting world, while more compact systems are relatively immune. This finding, which observational evidence supports, should help astronomers better understand the structure and evolution of alien solar systems across the galaxy, researchers said.

"The fact that planets observed within wide binaries tend to have more eccentric (or 'excited') orbits than those around isolated stars tells us that wide binaries do often disrupt planetary systems," lead author Nathan Kaib, of Northwestern University and the University of Toronto, told SPACE.com via email. [The Strangest Alien Planets (Gallery)]

"Thus, we believe most planetary systems are extended, with outer planets orbiting at tens of AU from their host stars," Kaib added. (One AU, or astronomical unit, equals the distance from Earth to the sun — about 93 million miles, or 150 million kilometers.)

The study was published today (Jan. 6) in the journal Nature and will be presented by Kaib at the 221st meeting of the American Astronomical Society in Long Beach, Calif., on Monday (Jan. 7).

Two-star systems occur commonly throughout our galaxy; indeed, astronomers think the Milky Way harbors about as many binary systems as single stars. Recently, astronomers have begun discovering planets in binary systems, some of them "Tatooine" worlds with two suns in their skies, like Luke Skywalker's home planent in the "Star Wars" films.

Many double-star systems throughout the galaxy are wide binaries, in which 1,000 AU or more separate the stellar companions on average.

The distance between stars in a wide binary often changes dramatically over time, however, since their orbits around a common center of mass can be far from circular.

"The stellar orbits of wide binaries are very sensitive to disturbances from other passing stars as well as the tidal field of the Milky Way," Kaib said in a statement. "This causes their stellar orbits to constantly change their eccentricity, their degree of circularity. If a wide binary lasts long enough, it eventually will find itself with a very high orbital eccentricity at some point in its life.”

Eccentric orbits bring the two stars quite close together from time to time, even if the wide binary has a large average separation distance. And these close encounters can wreak havoc on planetary systems, the researchers found after performing about 3,000 computer simulations.

In one set of runs, for example, the team added a wide-binary companion to our own solar system. In nearly half of the simulations, at least one giant planet — Jupiter, Saturn, Uranus or Neptune — got booted out into space.

Signficant orbital disruption generally takes hundreds of millions or billions of years to manifest, Kaib and his colleagues calculated.

"Consequently, planets in these systems initially form and evolve as if they orbited an isolated star," Kaib said. "It is only much later that they begin to feel the effects of their companion star, which often times leads to disruption of the planetary system."

Such destabilization, which is more dramatic in wide binaries than in more tightly orbiting two-star systems, does not always take the form of planetary ejection. Often, exoplanets just get tugged from their orginal, near-circular orbits into more eccentric ones, the simulations showed.

The researchers also looked at orbital eccentricities of actual exoplanets. The team found that planets in wide binaries have more eccentric orbits than worlds that circle single stars, suggesting the computer models are on the money.

"The eccentric planetary orbits seen in these systems are essentially scars from past disruptions caused by the companion star," co-author Sean Raymond, of the University of Bordeaux and the National Center for Scientific Research in France, said in a statement.

The team's computer simulations further suggest that these disruptions generally happen only in planetary systems that extend at least 10 AU or so from the host star.

Taken together, the observational and modeling results imply that many extrasolar systems harbor distantly orbiting worlds, though such planets are tough for astronomers to detect at the moment, researchers said.

"Given that most planet-detection campaigns cannot detect planets beyond 5-10 AU from their host stars, our results provide new clues about the characteristics of planetary systems in a regime that is poorly constrained by current observations," Kaib told SPACE.com. "We believe that planets orbiting at distances of 10 AU or further from their host stars are common."