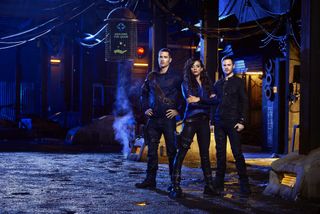 "Killjoys," a space- based show on the Syfy network, has been renewed for a second season in 2016.
(Image: © Syfy)

The space-based action shows "Killjoys" and "Dark Matter" will both be getting second seasons in 2016, the Syfy network announced this week.

"Dark Matter" tells the story of six people who wake up on a spaceship with no memory of who they are, or how they got there. According to a statement from the network, the show averaged 1.8 million viewers in its first season. The second season will consist of 13 episodes, and will premiere sometime in 2016.

"Killjoys" follows three space-romping bounty hunters and their talking spaceship through a planetary system called The Quad, where class tensions are about to boil over. The trio's lives are further complicated as their leader Dutch's dark past begins to haunt her. The show averaged 1.5 million viewers in its first season, according to Syfy. The 10-episode second season will air sometime in 2016. [Syfy's 'Killjoys' in Photos: Space Bounty Hunting Action & Adventure]

"Dark Matter," is based on a graphic novel by Joseph Mallozzi and Paul Mullie, former producers and writers for the "Stargate" franchise. Mallozzi serves as showrunner for "Dark Matter," and just before the show premiered, he spoke with Space.com about some of the awesome science fiction featured in the show. (Among other things, Mallozzi created a faster-than-light travel mechanism that involves the traveler downloading his or her brain to a computer, and uploading it into a clone body in a distant location.)

Created by screenwriter Michelle Lovretta (who talked with Space.com before the show's premiere), "Killjoys" is packed with lots of treats for science fiction fans, including gorgeous cosmic scenery and talking spaceships. There's also great chemistry among the show's three main cast members — Hannah John-Kamen as Dutch, Luke Macfarlane as D'avin and Aaron Ashmore as John.

"With exciting space-based action, deep world building and a standout cast, 'Killjoys' has struck a nerve with viewers and critics alike," Bill McGoldrick, executive vice president of original content at Syfy, said in a statement. "We can't wait to see what adventures Michelle Lovretta and Temple Street take Dutch, John and D'avin on in season two."

The Syfy channel has a strong space lineup set for late 2015 and 2016. In December, the network will debut a 10-part series called "The Expanse," based on the book series of the same name by James S. A. Corey (the pen name for Daniel Abraham and Ty Franck). The network has also announced plans to develop shows based on Frederik Pohl's book "Gateway," and Dan Simmons' novel "Hyperion." In addition, the network's time-travel-themed show "12 Monkeys," which is inspired by the 1995 Terry Gilliam movie, has also been renewed for a second season.