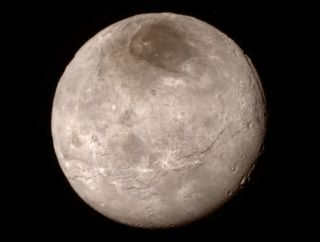 NASA will reveal more of the New Horizons spacecraft's up-close photos of Pluto and its moons today (July 17), and you can watch the unveiling live.

The new images, which New Horizons captured during its historic flyby of Pluto on Tuesday (July 14), will be released and discussed at a news conference that starts today at 1 p.m. EDT (1700 GMT). You can follow it live here on Space.com, courtesy of NASA TV.

The spacecraft has not had time to beam home much of this information to date; indeed, New Horizons remained in its nine-day-long "encounter mode" of operations through Thursday (July 16).

But the few photos received so far — none of which were taken at closest approach — have surprised and amazed scientists. New Horizons spotted giant ice mountains on Pluto, for example, and canyons on the dwarf planet's largest moon, Charon, that may be 6 miles (10 kilometers) deep. The spacecraft's images also reveal few craters on Pluto and Charon, suggesting that both bodies have been geologically active in the recent past.

Participating in today's news conference are:

The $723 million New Horizons mission launched in January 2006. The piano-size probe is now cruising away from Pluto, headed toward a 2019 rendezvous with another body in the distant Kuiper Belt — if NASA ends up approving and funding a proposed extended mission.