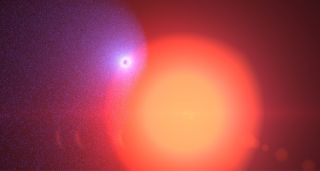 Artist's concept of the exoplanet GJ 436b, which is apparently surrounded by a massive gas cloud that streams behind the planet like a comet's tail for millions of miles.
(Image: © D. Ehrenreich / V. Bourrier (Université de Genève) / A. Gracia Berná (Universität Bern))

A Neptune-size planet appears to be masquerading as a comet, with a gargantuan stream of gas flowing behind it like a comet's tail. [Full Story: Bizarre Cometlike Alien Planet Is First of Its Kind]

Auroras blaze up after solar storm

Europe's Rosetta spacecraft, which is currently orbiting a comet as it hurtles around the sun, has been given nine additional months of operation time and will likely end its life by spiraling down onto the comet's surface, officials said. [Full Story: Rosetta to Spiral onto Comet's Surface After Extended Mission]

SpaceX gears up for another rocket-landing attempt

SpaceX will try once again, on Sunday (June 28), to land the first stage of its Falcon 9 rocket on a boat, and you can watch all the dramatic spaceflight action live. [Full Story: SpaceX to Try Bold Rocket Landing Again Sunday: Watch Live]

A heavyweight black hole in the heart of a distant galaxy has the mass of 140 million suns, according to new measurements. [Full Story: 140 Million Suns! Monster Black Hole Weighs In]

The group building a huge telescope atop Hawaii's tallest peak plans to restart construction this week, ending a two-month delay caused by protestors opposed to the ambitious project. [Full Story: Construction of Giant Telescope Pushes on Despite Protests]

Researchers are testing out robotic submarines in Antarctica to better understand how to explore the subsurface sea on Jupiter's icy moon Europa. [Full Story: How NASA Could Explore Jupiter Moon Europa's Ocean]

Signs of Mars life could be preserved in 'impact glass'

Newly discovered deposits of glass on Mars resulting from meteorite impacts may be an ideal place to search for signs of Red Planet life, a new study suggests. [Full Story: Martian 'Impact Glass' Could Potentially Preserve Signs of Life]