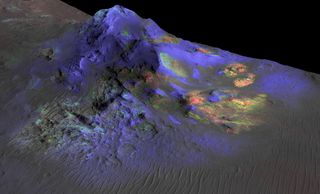 : A 3D view of Alga Crater on Mars — one of the locations where impact glass was found. The data is based on Mars Reconnaissance Orbiter observations.
(Image: © NASA/JPL-Caltech/JHUAPL/Univ. of Arizona)

Newly discovered deposits of glass on Mars resulting from meteorite impacts may be an ideal place to search for signs of Red Planet life, a new study suggests.

This type of glass, called impact glass, forms when a meteorite strikes the surface of a planet or moon, melting the surrounding rock into glass. While the impact itself is very destructive, the glass can preserve "biosignatures," or traces of life that are there before the impact takes place.

"Knowing that, we wanted to go look for [impact glasses] on Mars, and that's what we did here," study lead author Kevin Cannon, a graduate student in planetary geosciences at Brown University, said in a statement. "Before this paper, no one had been able to definitively detect them on the surface."

A 2014 study led by Peter Schultz, a planetary researcher at Brown University, found organic molecules and plant matter in impact glass formed millions of years ago in Antarctica.

"The work done by Pete and others showed us that glasses are potentially important for preserving biosignatures," Cannon added in the statement.

Cannon and fellow Brown researcher Jack Mustard detected the glass using images from NASA's Mars Reconnaissance Orbiter (MRO). Finding the evidence was challenging, study team members said, because from a distance, the spectrum of impact glass doesn't stand out well against the landscape.

So, to simulate what impact glass may look like on Mars, Cannon used powders and rocks of a composition similar to material found on the Red Planet's surface. He placed them in an oven to create the glass, and then measured the spectral composition.

Impact glass was found in several locations, specifically on the central peaks of craters that are formed after impact.

One of the landing-site contenders for the Mars 2020 rover happens to include a region with impact glass, researchers said. Called Hargraves, the location is near the Nili Fossae trough, which is a 400-mile-long (650 kilometers) depression. The region is also of interest because the crust may have been created when Mars was a wetter planet.