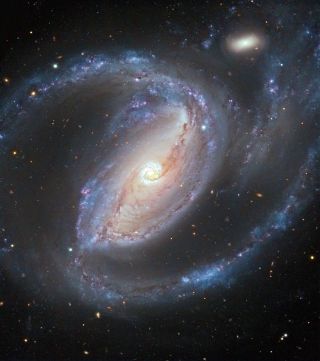 The black hole at the center of this galaxy, NGC 1097, is the mass of 140 million suns. The banded galaxy is 47 million light years from Earth, and this photo comes from optical measurements by the Very Large Telescope.
(Image: © ESO/R. Gendler)

A heavyweight black hole in the heart of a distant galaxy has the mass of 140 million suns, according to new measurements. A vivid video by the National Radio Astronomy Observatory describes how researchers "weighed" the black hole at the center of the barred spiral galaxy NGC 1097.

Many galaxies have huge black holes in their centers, and these objects affect the galaxies' growth and evolution. The galaxy NGC 1097 is 47 million light-years away from Earth, too far to determine the mass of its central black hole by the movement of the stars around it. But by tracking the movements of two types of molecular gases around the galaxy's center, researchers using the Atacama Large Millimeter/submillimeter Array in Chile (ALMA) were able to work backward and figure out the black hole's gravitational pull.

Their results show that this black hole is significantly larger than the one at the center of the Milky Way (140 million suns in mass versus the Milky Way's 4 million or so). [Milky Way's Monster Black Hole Unleashes Record-Breaking X-Ray Flare (Video)]

The ALMA telescopes tracked the radiation emitted from the two gases, hydrogen cyanide and formyl cation, as they swirled around the galaxy. The gases don't interact strongly with environmental conditions within the galaxy, such as ionized gas flowing inward or outward. This means the gases paint an accurate picture of the effects of gravity's pull alone. With just two hours of observational data, the researchers learned enough about the distribution and velocities of those gases to fit them to a model and calculate the pull of the galaxy's core black hole.

The mass of a central black hole affects the physical properties of its host galaxy, and recent work has shown that those effects are different for different types of galaxies, study lead author, Kyoko Onishi, a doctoral student at the SOKENDAI (The Graduate University for Advanced Studies) in Japan, said in a statement. To understand those effects, Onishi said it's important to measure the mass of these central black holes in various galaxy types.

Because of the quick precision measurements, "ALMA will enable us to observe a large number of galaxies in a practical length of time," added Onishi, who is doing her research at the National Astronomical Observatory of Japan (NAOJ).

The new research was detailed in The Astrophysical Journal on June 15.