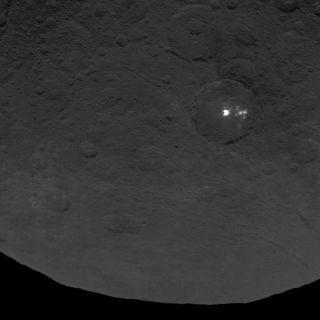 NASA's Dawn spacecraft has beamed home the best-ever photo of the mysterious bright spots that speckle the surface of the dwarf planet Ceres.

The new image resolves Ceres' strange spots, which are found inside a crater about 55 miles (90 kilometers) wide, into a cluster comprised of several patches, some of which were not visible in previous photos. But it doesn't solve the mystery of the spots' origin and composition.

"At least eight spots can be seen next to the largest bright area, which scientists think is approximately 6 miles (9 km) wide," NASA officials wrote in a statement today (June 22). "A highly reflective material is responsible for these spots — ice and salt are leading possibilities, but scientists are considering other options, too." [More Photos of the Dwarf Planet Ceres]

Dawn captured the photo on June 9 from a distance of 2,700 miles (4,400 km) — the altitude of its second mapping orbit of Ceres. Additional newly released photos taken from this orbit show other intriguing features, including a steep-sided mountain that rises about 3 miles (5 km) into space from the dwarf planet's heavily cratered surface, NASA officials said.

"The surface of Ceres has revealed many interesting and unique features. For example, icy moons in the outer solar system have craters with central pits, but on Ceres central pits in large craters are much more common," Dawn deputy principal investigator Carol Raymond, of NASA's Jet Propulsion Laboratory in Pasadena, California, said in the same statement.

"These and other features will allow us to understand the inner structure of Ceres that we cannot sense directly," she added.

The $473 million Dawn mission launched in September 2007 to investigate Ceres and Vesta — at 590 miles (950 km) and 330 miles (530 km) wide, respectively, the two largest objects in the main asteroid belt between Mars and Jupiter.

Both Ceres and Vesta are thought to be largely intact protoplanets left over from the solar system's early days (hence the mission's name). Studying them should therefore reveal key details about how rocky planets such as Earth and Mars were put together, NASA officials have said.

Dawn orbited Vesta from July 2011 through September 2012. The probe arrived at Ceres this past March, in the process becoming the first spacecraft ever to orbit a dwarf planet, as well as the first to circle two objects beyond the Earth-moon system.

Dawn will remain in its current orbit until June 30, when it will begin spiraling down to an orbit with an altitude of about 900 miles (1,450 km), NASA officials said. It will get there in early August. (Dawn employs extremely efficient but low-thrust ion engines, so it can take a while for the probe to get around.)

But Dawn will get eventually get even closer to Ceres. Before ending its mission in June 2016, the spacecraft will eye Ceres from an altitude of just 230 miles (375 km).