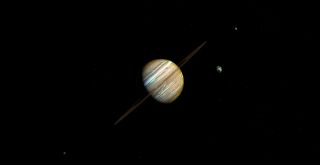 This artist’s impressions depicts three Mars-mass moons, two of which have liquid surface water and one of which is dry, orbiting a giant planet with rings.
(Image: © René Heller with PlanetMaker, Kevin M. Gill)

Exomoons are the wild card in the ongoing chase for habitable worlds.

Astronomers have discovered more than 1,900 exoplanets, a few of which might be friendly to life, but no moons circling these alien bodies have turned up as of yet. Astronomers do not know how common exomoons might be or, for that matter, what they might be like.

A new study fills in an important gap in the developing theoretical framework regarding exomoons. The paper looks at a special set of exomoons located in the habitable, or "Goldilocks zone" — the not-too-cold, not-too-hot band where water neither freezes nor boils off a planet’s (or moon’s) surface. [How Habitable Zones for Alien Planets and Stars Work (Infographic)]

The research hearkens back to the holy grail of exoplanet hunts: an Earth-like clone. Astronomers have fervently sought a world the mass and size of our own, orbiting at a similar distance from a star similar to our sun.

To date, however, most worlds with known masses, and orbiting at Earth-like distances from sun-like stars, are "super-Jupiters." As their name implies, these behemoths are even-more-jumbo versions of Jupiter, our solar system’s biggest planet. Such bloated, gaseous worlds, of course, would not themselves be habitable in any way.

But if these super-Jupiters orbiting in habitable zones could form large exomoons, these bodies might be excellent candidates for supporting life. So far, most exomoon formation models have been restricted to exoplanets with masses in the Saturn-Jupiter range, because scenarios similar to our solar system have primarily piqued astronomers. Given the fact that dozens of super-Jupiters are now known to occupy Earth-like real estate around sun-like stars, the study authors figured it was high time to broaden those models.

"We wanted to extend, for the first time, the calculations for the formation of water-rich moons around gas giants beyond the Jupiter mass regime," said lead author René Heller, a postdoctoral fellow in astrophysics at McMaster University in Ontario, Canada.

The work, accepted for publication in The Astrophysical Journal, is co-authored by Ralph Pudritz, director of the Origins Institute at McMaster University.

In short, Heller and Pudritz first confirmed earlier research showing that the bigger the planet, the bigger its moons can potentially be. Proportionally, super-Jupiters could therefore sport moons up to a few times more massive than Mars. But unlike any previous study, the authors further showed that these moons could be extremely water-rich and near the stellar Goldilocks zone.

Two moons of Jupiter — Callisto and Ganymede — are kinsmen of this new class of giant, water-rich moons, though unlike those potentially habitable worlds, the Galilean moons are frigid because of their remoteness from the sun.

Giant, water-rich, Goldilocks-zone moons might be ideal for the nurturing of alien life. These exomoons could represent the most prevalent, life-friendly abodes in the universe, scientists say.

"If Mars-sized, water-rich moons around super-Jupiters are common, as our study suggests, then habitable moons could easily outnumber habitable planets," said Heller. [10 Exoplanets That Could Host Alien Life]

Heller and Pudritz built upon on previous models of how moons form around planets. The formation process involves a disk of material encircling the developing planets. In this disk, solid particles glom together, bit by bit, to form larger and larger bodies. Of particular importance to this process is the water-ice line, the distance from the planet beyond which any water in the disk of material freezes out as solids, such that it can stick to the growing moonlets. (Planets aggregate and gather water in the same manner as moons around a planet, but in a comparatively immense, so-called accretion disk around a young star.)

The scientists created seven models, with resulting planetary bulks ranging from Jupiter’s mass to a dozen times more massive. The models included such key variables as temperatures within the exomoon-forming disk and heat from the hot, new planet itself at the disk’s center. Over time, as the planet cools and shrinks, this heat dissipates, affecting where water can persist within the moon-forming disk.

With all these numbers plugged in, the simulations ran their course. For the low end at Jupiter-mass, the resulting model moons exhibited realistic properties, such as mass and distance from their host planet, when compared to the real thing in our solar system. The results therefore boded well for expanding the model to the super-Jupiter realm to see if big, life-friendly moons are possible. [The Strangest Alien Planets (Gallery)]

The study went on to show that approximately 1/10,000 the mass of a host planet typically ends up agglomerating into exomoon satellites.

Super-Jupiters could thus theoretically host super-sized moons, bigger than those around their gas giant counterparts here in the solar system. Jupiter, for example, has four big moons, known as the Galilean moons — Io, Europa, Ganymede and Callisto. The biggest of these, Ganymede, although the heftiest moon in the solar system, is merely 2.5 percent the mass of Earth.

Scaling that figure up, super-Jupiters could proportionally result in an exomoon more massive than the planet Mars, which has a tenth of Earth’s mass.

"A planet with a mass about 10 times that of Jupiter’s could have a moon system that weighs about 10 times the total mass of the Galilean moons, or about six times the mass of Mars," said Heller. "Distribute this mass over three to five moons, and each of them will have about one or two Mars masses."

That finding is exciting news from an astrobiological perspective, for bigger is better when it comes to moons. As moons begin to reach more planetary-like masses, some characteristics deemed advantageous to life can start to come into play.

More mass translates into greater chances of gravitationally holding onto an atmosphere, for instance. Atmospheres can do a planet a whole lot of good when it comes to life, providing a source of gases for enabling biological chemistry as well as moderating the climate, transporting water and nutrients, and shielding from harmful stellar and cosmic high-energy radiation.

Also, of major astrobiological importance, the two scientists showed that exomoons around super-Jupiters could reasonably be composed of perhaps half water by mass, like Callisto and Ganymede. The study tracked water ice lines, described earlier as the boundary within a developing moon system wherein heat from a young planet keeps any available water in a gaseous state, and thus not readily captured by the forming moon. Beyond the water ice line, water freezes solid as ice and gets incorporated into a gestating moon. In a habitable zone super-Jupiter situation, however, that ice scooped up by the moon would potentially remain liquid on its surface.

In a new companion paper to their Astrophysical Journal study, Heller and Pudritz looked further into where these types of super-Jupiters and their potentially habitable moons could form in a fledging solar system. [Our Solar System: A Photo Tour]

Most of the giant exoplanets likely formed beyond the water-ice line around the star at about 3 astronomical units (AU). They subsequently migrated into an Earth-like distance (1 AU) from their star as a result of gravitational pull.

A key question, which Heller and Pudritz tackled in their recent follow-up study, accepted for publication in the journal Astronomy & Astrophysics, is whether the many extrasolar giants now at 1 AU could have formed their moons after migration into the habitable zone.

Intriguingly, the authors found that super-Jupiter planets can only form big, water-rich moons beyond 3 to 4 AU from sun-like stars because planetary accretion disks become very small and very warm closer to their star. Hence, for giant planets in the habitable zone to have Mars-size, water-rich moons, they would need to piggyback their full-fledged moon systems from the cold outer regions of a solar system into its warmer, inner sanctum — a plausible scenario, it seems, based on leading theories of solar system evolution.

Out there, waiting to be found?

In the search for these large exomoons, there is some additional good news, namely that they should be detectable with the current and next generation of space- and ground-based observatories. A Mars-mass moon consisting of half water would be substantially larger than the mostly waterless Red Planet itself—about 70 percent of Earth’s diameter, whereas Mars is half Earth’s girth. This is because water has a low density compared to the rock and iron that compose most of Earth and Mars. In other words, water worlds do not pack their mass into as small a volume as mostly rocky ones.

The smallest exoplanets found to date are around the size of Earth’s moon, which is substantially smaller than Mars. Therefore, the Mars-plus moons theorized in Heller’s models should be observable targets with current or near-future technology. They could yet turn up in data from the first observing run of NASA’s Kepler mission, which is still being analyzed.

Down the road, the European Space Agency’s PLATO space telescope mission, as well as the colossal, 30-meter-class ground telescopes slated to open next decade — most promisingly the 40-meter European Extremely Large Telescope — could further hone in on these fascinating, theoretical exomoons.

Heller pointed out that the scene in a multi-moon arrangement around a habitable zone, super-Jupiter could be astonishing, if indeed several of the moons are habitable — or even inhabited.

"To make things more dramatic, imagine that all the other moons have their own atmospheres and oceans, just in various fashions," he said. "Any civilization that would live on one of these moons would have an extremely interesting astrobiological environment to explore, and with other habitable worlds quite close by."