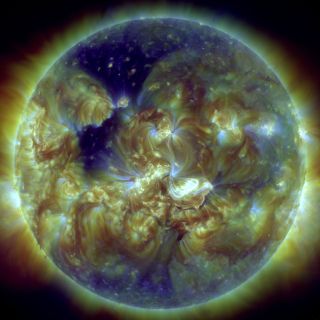 On Jan. 7, 2014, the sun unleashed a major solar flare and coronal mass ejection (the bright spot at center right), but the Earth's magnetic field channeled the worst of the solar storm away from the planet, scientists say.
(Image: © Möstl et al., Nature Communications)

A giant eruption from the sun that scientists thought would hit Earth in 2014 missed because the sun's magnetic field channeled it away from the planet in an unexpected way, researchers say.

This finding could lead to better modeling and forecasting of disruptive solar storms in the future, the scientists added.

Solar eruptions, known as coronal mass ejections, are the hurricanes of space weather. These explosions can drive on the order of a billion tons of super-hot matter out from the sun. [Solar Storm Photos of 2015]

When coronal mass ejections hit Earth, they can trigger major disturbances known as geomagnetic storms, which can in turn wreak massive havoc. For example, in 1989, a coronal mass ejection blacked out the entire Canadian province of Quebec within seconds, damaging transformers as far away as New Jersey, and nearly shutting down U.S. power grids from the mid-Atlantic through the Pacific Northwest.

To forecast the hazards that coronal mass ejections might pose to assets both on the ground and in space, researchers need to know where they are headed. However, much remains unknown about what guides their direction, and therefore whether they might hit Earth.

For instance, on Jan. 7, 2014, astronomers spotted a very fast coronal mass ejection headed toward Earth, one traveling more than 5.3 million mph (8.6 million km/h). Scientists expected it would trigger a strong geomagnetic storm, one that could spark radio navigation problems and set off alarms in power systems. However, the worst of the eruption missed Earth, and no geomagnetic storm followed.

To learn more about why this coronal mass ejection missed Earth, scientists collected data from 7 different space missions that saw the explosion. They modeled the evolution of the eruption from the sun, up to Earth, and as far as Mars, where it was detected by the Curiosity rover.

Instead of hitting Earth, the coronal mass ejection was slanted toward a zone below and behind Earth. The researchers suggest it got channeled this way by powerful magnetic fields originating from a region nearby on the sun.

"Very fast and possibly havoc-creating coronal mass ejections can erupt in a very different direction than indicated by the position of their source region on the sun,"study lead author Christian Möstl, a heliophysicist at the Austrian Academy of Sciences in Graz, told Space.com.

Potential applications of this research include better real-time predictions of space weather. "Forecasters should always look at the magnetic fields of the solar corona surrounding a big eruption to see how likely such a strongly channeled eruption is," Möstl said.

One problem with space weather forecasts is that even if scientists can figure out whether a coronal mass ejection is headed toward Earth, they cannot tell how powerful it is until it hits the planet.

"This is like not knowing the magnitude of a hurricane just before it hits the shore," Möstl said. "This is a situation that clearly must be improved."

The scientists detailed their findings online Tuesday (May 26) in the journal Nature Communications.