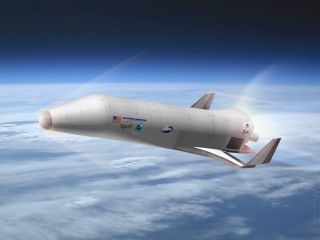 Artist's concept of the space plane being designed by Northrop Grumman, with help from Scaled Composites and Virgin Galactic, for DARPA's XS-1 program.
(Image: © Northrop Grumman)

The XS-1 is a space plane under development by the U.S. military's high-tech agency, the Defense Advanced Research Projects Agency (DARPA). The major goal of the project is to reuse the spacecraft frequently, with a proposed launch rate of 10 one-day missions in just 10 days. In May 2017, DARPA selected Boeing as the provider for phases 2 and 3. Test fights are scheduled for 2020.

"Technologies derived from the XS-1 program will enable routine space launch capabilities with aircraft-like cost, operability and reliability," read a DARPA announcement from November 2013 cited in a 2014 Space.com article.

"The long-term intent is for XS-1 technologies to be transitioned to support not only next-generation launch for government and commercial customers, but also global reach hypersonic and space access aircraft."

So far, there has been no fully reusable space vehicle due to technical complication. The NASA space shuttle, a partially reusable system, flew 135 times between 1981 and 2011. Parts of the space shuttle had to be re-manufactured for every flight, such as the external tanks and a certain number of tiles for the re-entry protection system (which would get damaged or fall off during landing.)

Other early attempts for reusable space launch vehicles include the X-30 (1980s) and X-33 VentureStar (1990s), which never flew. DARPA also attempted a program called Responsive Access, Small Cargo, Affordable Launch (RASCAL) in the early 2000s. For the XS-1, DARPA originally announced the program in 2013 and it is now in Phase 2/3. In 2014, DARPA said reusability would be of help for rapid launches at a low cost.

"In an era of declining budgets and adversaries' evolving capabilities, quick, affordable and routine access to space is increasingly critical for both national and economic security," DARPA said in a 2014 press release.

DARPA pointed out that satellite launches on rockets must be scheduled years in advance and cost a lot of money. "DARPA created its Experimental Spaceplane (XS-1) program to help overcome these challenges and create a new paradigm for more routine, responsive and affordable space operations," the agency added.

In 2014, three teams were selected to compete for the flight contract:

Tasks for Phase 1 included developing the vehicle, finding and reducing the risk of creating the "core" technologies and processes, and figuring out how to move forward into the flight phase, DARPA said.

"DARPA expects the performers to explore alternative technical approaches from the perspectives of feasibility, performance, system design and development cost and operational cost. They must also assess potential suitability for near-term transition opportunities to military, civil and commercial users," the agency wrote.

The program entered Phase 2 in 2016. In 2017, DARPA selected Boeing to build and test the XS-1. "The XS-1 would be neither a traditional airplane nor a conventional launch vehicle but rather a combination of the two, with the goal of lowering launch costs by a factor of ten and replacing today's frustratingly long wait time with launch on demand," said Jess Sponable, DARPA program manager, in a May 2017 press release. "We're very pleased with Boeing's progress on the XS-1 through Phase 1 of the program and look forward to continuing our close collaboration in this newly funded progression to Phases 2 and 3 — fabrication and flight."

The ultimate goal of the development program is a flight test, when Boeing and DARPA will attempt to do 10 launches in 10 days. This will happen in Phase 3. First, there will be several shakedown flights, and then the XS-1 will do multiple space launches with speeds ranging from Mach 5 to Mach 10. The XS-1 will also send a demonstration payload that has a mass of between 900 and 3,000 lbs. (roughly between 410 and 1,360 kg).

"If successful, the program could help enable a commercial service in the future that could operate with recurring costs of as little as $5 million or less per launch, including the cost of an expendable upper stage, assuming a recurring flight rate of at least ten flights per year — a small fraction of the cost of launch systems the U.S. military currently uses for similarly sized payloads," DARPA said in its May 2017 press release. (The $5 million cost is the actual cost and not the commercial price, DARPA said.)

"Another goal of the program is to encourage the broader commercial launch sector to adopt useful XS-1 approaches, processes, and technologies that facilitate launch on demand and rapid turnaround — important military and commercial needs for the 21st century. Toward that goal, DARPA intends to release selected data from its Phase 2/3 tests and will provide to all interested commercial entities the relevant specs for potential payloads," DARPA added.

Rapid turnarounds will require using some technology that is already in place on military aircraft, DARPA stated, such as "easily accessible subsystem components" that engineers can take out quickly for maintenance and repairs. The XS-1 will also use some known systems, such as the Aerojet Rocketdyne AR-22 engine that is a version of the space shuttle's main engine.

XS-1 will also have a share of innovative technologies. These include extremely lightweight propellant tanks to hold liquid oxygen and liquid oxygen, hybrid composite-metallic wings and surfaces that are capable of surviving multiple re-entries, and some autonomous flight capabilities.