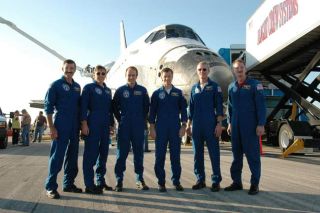 CAPE CANAVERAL, Fla. - The six Atlantisshuttle astronauts who jump started construction of the International SpaceStation (ISS) are happy to be home after a job well done.

"It's leftme with a feeling of pride and awe," said STS-115pilot Chris Ferguson, who guided Atlantis around the ISS after undockingSunday. "It was really quite a moment for me personally to see it, and to knowthat we had the pleasure and the honor and the distinction to be a part of it."

JoiningJett and Ferguson on their STS-115 mission - which delivered a hefty pair of $372million trusses and expansivesolar arrays to the ISS - were mission specialists JosephTanner, DanielBurbank, HeidemarieStefanyshyn-Piper and Canadian Space Agency astronaut StevenMacLean.

"Themission, from our standpoint, went off very well," said Jett, who toldreporters STS-115 was likely his last mission to actually fly in space. "Iwould hope five years from now, we will have an assembled space station."

NASA's STS-115mission returned the U.S. space agency to an operational mode ofspaceflight after two successful testflights to recover from the 2003Columbia accident. The mission came after four years of training for theSTS-115 astronauts, which Jett said seemed to be actually more challenging thanthe spaceflight itself.

"This crewmade a choice to stay with this flight, NASA's ISS program manager MichaelSuffredini said during the STS-115 mission. "They chose to make a hugesacrifice to stick with it."

Atlantis'astronaut crew staged threespacewalks outside the ISS which, despite their complexity, appeared to go relativelysmoothly.

"I know itmight have looked easy, it was not," said Tanner, a veteran spacewalker, addingthat many of the massive ISS components installed during STS-115 were flown andactivated for the first time. "What we did on those EVAs was not easy."

One majorasset to accomplish the intense STS-115 spacewalks was the support of the spacestation's Expedition13 crew of PavelVinogradov, JeffreyWilliams and ThomasReiter, the Atlantis astronauts said.

"Those guyswere phenomenal," Jett said of the Expedition 13 crew. "There was no way wecould have gotten back-to-back EVAs without them...we knew they were good, wedidn't know how good. We were impressed."

"It's amuch better view than it is underneath a ship," Stefanyshyn-Piper said.

Ferguson said before landing that he and hiscrew could use an extra day in orbit to relax and look out the window. But whena few mysteryobjects floating away from the orbiter prompted yet another round of heatinspections - the crew's third set of their mission - with Atlantis' roboticarm and alanding delay, his wish came at a price.

"They werelooking out the window, but they weren't looking at the Earth," Jett joked.

"While it'sfun to operate the arm, it would have been nice to get at least a couple hoursoff to look out the window," Ferguson said.

MacLeanbecame the second Canadian ever to walk in space during STS-115 and the firstever from his country to actually wield the ISS arm built in his homeland. Butthe most memorable moment, he said, will be during a spacewalk he shared with Burbank as both astronauts struggled to remove a stubborn bolt that could have thrown awrench in plans to deploy a new solar array.

"When wegot to that second bolt and it just wouldn't go at first and it was tight, Ithought, 'Oh man, I am not coming inside until that thing comes off,'" MacLeansaid. "Plus, when you're on the end of the [Port 3/Port 4] truss like that,you're splitting the Earth and space while you're doing it and it's a greatplace to be."

"That couldhave brought the mission to a halt for at least a day or two or more just tofigure out how to get that thing off of there," Burbank said of the bolt.

But withthe mission complete, and a stunningsuccess in NASA's view, Ferguson said he will focus his next few hours onrelearning how to function on Earth.

"You wouldthink that after a week and a half that your body wouldn't forget what gravityis like," Ferguson said. "I think I've spent the last seven hours or so tryingto remember, and I'm getting there."