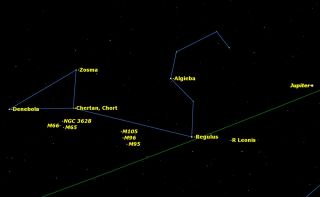 Face south about 10 p.m. to find the constellation Leo, the Lion, with giant planet Jupiter nearby.
(Image: © Starry Night Software)

One of the surest signs of spring for stargazers is the constellation Leo high in the evening sky. This is a very special constellation for me, as it was the very first one I identified on my first night as an amateur astronomer decades ago.

One of the 12 traditional constellations of the zodiac, Leo is one of the best-known star patterns in the sky. It is made up of fairly bright stars, and has a clearly recognizable pattern — rather, two patterns. As seen from the Northern Hemisphere, Leo consists of a sickle or reversed question mark on the right and a right-angled triangle on the left.

The "period" at the bottom of the question mark is the first-magnitude star Regulus, which is Latin for "king," a fitting star for a lion. The three stars that form the triangle are Denebola on the left, Zosma above and a star known as Chertan or Chort at the right angle. [Best Night Sky Events of April 2015 (Stargazing Maps)]

Stargazers with telescopes will find many objects of interest in Leo. When you look into Leo, you are looking northward from the Milky Way galaxy, so your view is not obscured by gas, dust and nearby stars. As a result, Leo is one of the richest places to hunt for galaxies. Leo has some of the brightest and easiest-to-spot galaxies in the night sky.

Leo contains two "triplets" of galaxies: three galaxies that are both close together in our sky and actually close to each other, forming groups like our own Local Group of galaxies.

The first triplet consists of Messier 65, Messier 66 and NGC 3628, all of which are located between 35 million and 36 million light-years away from Earth. Messier 66 is one of the easiest galaxies for a beginning astronomer to view, as its high surface brightness makes it visible in quite small telescopes. It is also one of the few galaxies that can punch through the light pollution of our cities. M65 is almost as bright, but the third member of this triplet, NGC 3278, is a galaxy viewed on edge, and is much harder to spot.

The other triplet is located almost exactly halfway between Chertan and Regulus, and consists of three of Messier's galaxies: M95, M96 and M105. M105 was not part of Messier’s catalog as originally published, but was one of six objects that Messier added in handwriting in his own printed copy. Although these three are not as bright as M65 and M66, they are still among the easiest galaxies to spot. M96 and M105 are close together and 31 million to 32 million light-years away from Earth, while M95 is a little more distant, at 38 million light-years away.

While Leo's galaxies get a lot of attention, we shouldn't forget the nearby stars that make up the pattern of the constellation. Regulus itself, 79 light-years away, is a fine double star, easily split in binoculars. The primary star is bright blue-white in color, while the much fainter secondary star, 3 arcminutes away, is pale yellow in comparison.

Just above Regulus is the second-brightest star in Leo, Algieba, which is also a double star, one of the finest in the night sky. It is located 130 light-years from the sun. You will need a small telescope with a magnification of about 125X to split it into its two components, almost equal in brightness and both yellowish in color.

Leo is also home to one of my favorite variable stars, R Leonis, 370 light-years away. This is a classic Mira-type long-period variable, deep red in color. It varies over a period of 312 days between magnitude 4.4 and 11.3. This change in brightness results when the whole star gets larger and smaller, changing color in the process. When R Leonis is at its largest, if it were in the sun's position, it would reach as far as Mars' orbit. Despite its huge size, R Leonis contains only 70 percent as much mass as the sun. At its brightest, it is visible to the naked eye in a dark sky; at its dimmest, it requires a 70-mm telescope to be seen.

Because of its location close to Regulus, a wide range of brightness and good comparison stars nearby, R Leonis is an excellent target for anyone interested in beginning to observe variable stars. You can get charts to help you find it, as well as observing instructions, on the AAVSO's website: http://www.aavso.org.

This article was provided to Space.com bySimulation Curriculum, the leader in space science curriculum solutions and the makers of Starry Night and SkySafari. Follow Starry Night on Twitter @StarryNightEdu. Follow us @Spacedotcom, Facebookand Google+. Originally published on Space.com.