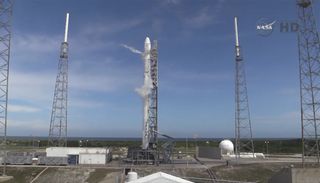 SpaceX's Falcon 9 rocket stands poised to launch a Dragon spacecraft from Cape Canaveral Air Force Station in Florida on April 13, 2015 on a mission to deliver NASA cargo to the International Space Station. It is SpaceX's sixth cargo mission for NASA.
(Image: © NASA TV)

Bad weather forced private spaceflight company SpaceX to postpone a daring reusable rocket landing test on Monday (April 13) by at least 24 hours, a delay that also pushed back the delivery of fresh cargo to the International Space Station for NASA.

SpaceX was scheduled to launch a Dragon cargo capsule Monday at 4:33 p.m. EDT (2033 GMT) from Florida's Cape Canaveral Air Force Station atop the company's Falcon 9 rocket, whose first stage would then return to Earth and try to land on the company's "spaceport drone ship" in the Atlantic Ocean.

But a thunderstorm veered too close to the launch site, forcing mission controllers to scrub the liftoff attempt with less than three minutes to go in the countdown. "Launch postponed due to lightning from an approaching anvil cloud," SpaceX CEO Elon Musk wrote in a Twitter post after the launch delay. [SpaceX's Reusable Rocket Landing Test in Photos]

There is a 50 percent chance of good weather for the Tuesday attempt, NASA officials said.

The Hawthorne, California-based SpaceX holds a $1.6 billion contract with NASA to fly at least 12 unmanned cargo missions to the International Space Station. The company has completed five of those flights; the upcoming liftoff, whenever it occurs, will kick off resupply mission number six.

The rocket landing maneuver is part of SpaceX's internal effort to develop fully and rapidly reusable rocket technology, a key priority for the company and its billionaire founder and CEO, Elon Musk.

SpaceX has tried the drone-ship landing once before, during the Jan. 10 launch of the previous Dragon cargo mission. That attempt was nearly successful: The Falcon 9 first stage hit the robotic boat but came down too hard and exploded on its deck.

The rocket stage's stabilizing "hypersonic grid fins" ran out of hydraulic fluid during the Jan. 10 try, Musk said. He promised to fix the issue in time for the next landing attempt.

"At least it [should] explode for a [different] reason," Musk tweeted on Jan. 16.