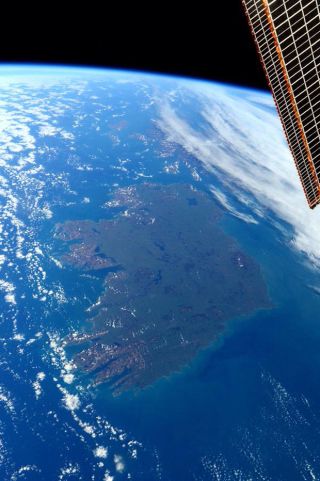 Even astronauts in space can celebrate St. Patrick's Day.

NASA astronaut Terry Virts beamed down two photos from the International Space Station in honor of the Irish holiday today (March 17). The images show Ireland — the "Emerald Isle" — as seen from space.

"#HappyStPatrickDay with best wishes from the #E43 [space station's Expedition 43] crew," Virts wrote on Twitter. "From space you can see the 'Emerald Isle' is very green!"

Virts also posted a little game via Twitter today for the holiday, asking his followers to guess which of four images shows Boston, Massachusetts, an area of the United States known for its St. Patrick's Day celebrations.

"Where did I pAAAk my CAAAAr," Virts wrote on Twitter, parroting a Boston accent. "#HappyStPatrickDay! #ISSPlayBall fans, which image is #Boston from the @Space_Station?"

Plenty of astronauts have celebrated St. Patrick's Day from space. Irish-American astronaut Cady Coleman played a 100-year old flute as a tribute to the holiday in 2011, and Canadian astronaut Chris Hadfield posted a series of updated on Twitter for the holiday in 2013. Hadfield even recorded a cover of the Irish classic "Danny Boy" and sent it down from orbit.

"From high above the world to the Irish everywhere, happy St. Patrick's Day," Hadfield said at the beginning of his "Danny Boy" recording. You can listen to Hadfield's song via SoundCloud.

European Space Agency astronaut Samantha Cristoforetti and Russian cosmonaut Anton Shkaplerov join Virts on the space station. The three crewmembers just said goodbye to three other spaceflyers who landed back on Earth last week, and they will gain three new crewmembers by the end of the month.

NASA's Scott Kelly and cosmonauts Mikhail Kornienko and Gennady Padalka will fly up to the station on March 27. Kelly and Kornienko will actually spend one year aboard the space station, marking the orbiting outpost's first year-long mission.