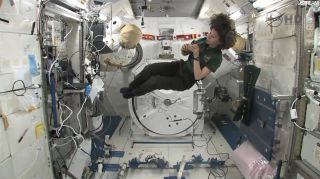 Irish astronaut Cady Coleman plays a pennywhistle on loan from the Irish band The Chieftains while flying in the Japanese Kibo lab on the International Space Station on St. Patrick's Day, March 17, 2011.
(Image: © NASA TV)

Irish-American astronaut Cady Coleman has not forgotten her Emerald Isle roots, even as she sails high above Earth on the International Space Station. The NASA astronaut marked St. Patrick's Day in space by playing a solo on a 100-year-old Irish flute.

"I love St. Patrick's Day," Coleman said in a NASA video released today (March 17). "In my family, we are a quarter Irish on each side and somehow that adds up to much more than a half."

When she launched toward the space station in December on a Russian spacecraft, Coleman — a hobby flutist — made sure to take a bit of that Irish heritage along for the ride. She packed away two Irish instruments — an antique wooden flute and a shiny pennywhistle — that were loaned to her by the members of the Chieftains, an Irish band.

"St. Patrick's Day is a day when people all over the Earth recognize their Irish heritage," Coleman said while wearing an appropriately green shirt. "And now we're doing that from space as well. " [Video: Astronaut Cady Coleman Plays Irish Flute in Space]

The wooden flute is owned by Chieftains member Matt Molloy, and the pennywhistle is one used by his bandmate Paddy Maloney, Coleman said.

"I might not have mentioned that the trip would have been six months long and that their flutes would have traveled millions of miles before they came home, but I'd like to reassure them that their treasures are just fine," Coleman said. "They're actually never far from home because we fly over Ireland several times a day."

Coleman actually took four flutes into space with her on this current mission. In addition to those from the Chieftains and her personal flute, she also has one from Ian Anderson, founder of the band Jethro Tull.

Coleman is one of three astronauts currently living on the International Space Station (three other crewmembers returned to Earth yesterday), and is the outpost's only American crewmember. An Italian astronaut and Russian cosmonaut round out the crew.

Another three spaceflyers (a NASA astronaut and two cosmonauts) are due to launch toward the space station in the next few weeks. Their initial March 29 (EDT) liftoff was delayed due to a technical glitch on their spacecraft.

Coleman and her two current station crewmates are scheduled to return to Earth in September.