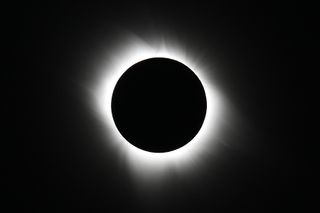 This week, the moon will completely cover the disk of the sun, creating a solar eclipse that only a small part of the world can see.

The March 20 total solar eclipse event will be the first since Nov. 3, 2013. The dark umbral shadow cone of the moon will trace a curved path primarily over the North Atlantic and Arctic Oceans, beginning off the southern tip of Greenland and then winding its way counterclockwise to the northeast, passing between Iceland and the United Kingdom.

The shadow will then pass over the Danish-owned Faroe Islands, the sparsely inhabited Norwegian island group of Svalbard and then it will hook counterclockwise toward the northwest, where it leaves the Earth’s surface just short of the North Pole. [Solar Eclipses: An Observer's Guide (Infographic)]

If you don't have the chance to see the solar eclipse in person, you can catch it live online as well. The online Slooh Community Observatory will broadcast live views of the solar eclipse through its website Slooh.com, beginning at 4:30 a.m. EDT (0830 GMT).

You can also watch the total solar eclipse webcast on Space.com on March 20, courtesy of Slooh.The Virtual Telescope Project will also air live views of the eclipse through the project's website beginning at 4 a.m. EDT (0800 GMT), and it will also be carried on Space.com if possible.

Big show … but a small audience

The Faroes are an island group consisting of 18 major islands with a total area of approximately 540 square miles (1,400 square kilometers) and a population of almost 50,000 people. The islands are rugged and rocky with some low peaks; the coasts are mostly cliffs.

The point of greatest eclipse occurs about 162 miles (260 km) north of the Faroes, in the Norwegian Sea. By the standards of most eclipses, the moon’s shadow projected onto the Earth’s surface for this event will resemble a huge ellipse of darkness measuring about 288 miles (463 km) wide by 93 miles (150 km) long.

These unusual dimensions can be attributed in part to the fact that about 13.5 hours earlier, the moon will arrive at that point in its orbit closest to Earth (perigee), 222,192 miles (357,584 km) away. And because the shadow is passing over the Arctic, it will strike the Earth at a very oblique angle, resulting in its distinct elliptical shape. (Solar eclipse enthusiast Michael Zeller created an interesting animation showing the eclipse's path.)

About a half hour after leaving the Faroes, the shadow makes its next — and final — landfall at Svalbard, a Norwegian archipelago in the Arctic Ocean. Situated north of mainland Europe, it is about midway between continental Norway and the North Pole. The largest island is Spitsbergen, followed by Nordaustlandet and Edgeøya. Other than the research stations located at Alert, Nunavut and Nord, Greenland, Svalbard is the northernmost place in the world with a permanent population. Based on the most recent census, only 2,642 people live there.

A shipboard observer who might be blessed with clear skies at the point of greatest eclipse would see the sun completely obscured for 2 minutes 46.9 seconds.

The town of Barentsburg, on Spitsbergen (one of the principal islands of Svalbard) will witness 2 minutes 20 seconds of total eclipse beginning at 1011 GMT with the sun standing a scant 11 degrees. Since your clenched fist measures roughly 10 degrees across, this means that the totally eclipsed sun will lie very low — only “one fist” above the south-southeast horizon.

Unfortunately, the typical weather pattern for this part of the globe as the winter transitions to spring is not very favorable. The chances for a sky with clear-to-scattered clouds averages only 20.4 percent for the Faroe Islands and a little better at 34.6 percent for Spitsbergen. But sometimes a place with poor weather prospects can get lucky.

A large partial eclipse for Europeans

An artifact of the total eclipse will be a large partial eclipse of the sun that will be visible across all of Europe, northern Africa and much of northern Asia. Depending on where you are in Europe, you will see anywhere from roughly 50 to nearly 99 percent of the sun’s diameter eclipsed by the moon.

In those areas where 80 percent or greater coverage is to occur, a weird "counterfeit twilight" will happen for a few minutes around the time of maximum eclipse. Those areas with an eclipse magnitude greater than 90 percent include Ireland, much of Great Britain (London gets 87 percent), Scotland, Norway, central and northern Sweden, northern Finland and Iceland (97 percent coverage for Reykjavik).

You can find local eclipse times for cities in Europe through eclipsewise.com. EclipseWise also has a map of eclipse times in the Atlantic, Africa and Asia.

WARNING: If you’re in the eclipse zone, be very careful. Never look directly at the sun without special safety equipment; permanent and serious eye damage could result. You can build a pinhole camera or solar projector with binoculars to safely observe the eclipse.

Editor's Note: Skywatching columnist Joe Rao plans to fly above any clouds on a specially chartered jet that will attempt to rendezvous with the moon's shadow near the Faroes. Soon after the eclipse is over, check back here at Space.com for his report on the eclipse.

If you SAFELY observe the March 20 total solar eclipse and would like to share photos, videos or comments on the experience with Space.com for a possible story or image gallery, please contact managing editor Tariq Malik at spacephotos@space.com.

Joe Rao serves as an instructor and guest lecturer at New York's Hayden Planetarium. He writes about astronomy for Natural History magazine, the Farmer's Almanac and other publications, and he is also an on-camera meteorologist for News 12 Westchester, N.Y.Follow us @Spacedotcom, Facebookand Google+. Original article on Space.com.