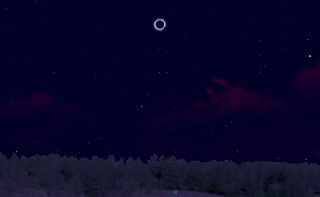 The total eclipse of the Sun on March 20, as it will appear from Tórshavn in the Faroe Islands, northwest of Scotland.
(Image: © Starry Night Software)

There will be a total eclipse of the sun on March 20, but unfortunately very few people will get to see its total phase.

This is because the path of totality of the solar eclipse, while unusually wide and quite long, mostly passes over the vast north Atlantic Ocean.

The path of totality makes landfall in just two remote groups of islands. The first is the Faroe Islands, an independent country that's part of the Kingdom of Denmark and is located about halfway between Iceland and the northern tip of Scotland. The image above shows the view of the eclipse that Faroe Islanders should see, if their skies are clear. [Photos: Total Solar Eclipse of November 2012]

The second island group is Svalbard, a part of Norway. It is located about halfway from the mainland of Norway to the North Pole. About 50,000 people live in the Faroes, while fewer than 3,000 live in Svalbard. These meager populations will swell on the day of the eclipse, as eclipse chasers from around the world congregate there.

Because weather prospects for both island groups are poor, a number of eclipse chasers will view the event from ships or planes, which can maneuver to reach favorable viewing locations.

Space.com's own Joe Rao will be on one of those planes.

Even if very few will see the total phase of the eclipse, people over a vast region will be able to view its partial phases. This includes all of Europe, most of northern Africa, western Asia and parts of the Middle East. Saint John's, Newfoundland, will see a tiny bit of the eclipse at sunrise, but North America will be otherwise shut out.

WARNING: As always, partial eclipses like this one must be viewed with extreme caution. The safest way to view it is to use a pinhole or small mirror to project the image of the eclipsed sun safely on a wall or ceiling. Never look directly at the sun unless you have a proper solar filter. Such filters, often called "eclipse shades," are usually widely available in areas where an eclipse will take place. A #14 welder's glass also provides adequate protection. These are only available from specialized welder's supply stores; the #12 glasses sold in hardware stores do not provide adequate protection. Do not use ordinary sunglasses, photographic film, CDs or mylar packaging, as none of these filter out the infrared rays that cause eye damage.

If you attempt to photograph the eclipsed sun, you will also need a special solar filter, as the uneclipsed portion of the sun can permanently damage the sensor in your camera. It's best to leave the photography to the experts, who have the proper equipment and techniques.

Editor's note: If you will be in a good postion to SAFELY observe the March 20 total solar eclipse and would like to share photos, videos or comments on the experience with Space.com for a possible story or image gallery, please contact managing editor Tariq Malik at spacephotos@space.com.

This article was provided to Space.com by Simulation Curriculum, the leader in space science curriculum solutions and the makers of Starry Night and SkySafari. Follow Starry Night on Twitter @StarryNightEdu. Follow us @Spacedotcom, Facebook or Google+. Originally published on Space.com.