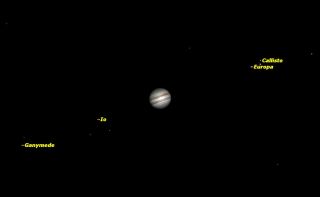 Jupiter just past opposition will be shining brightly most of the night. It is in Cancer all month.
(Image: © Starry Night Software)

The brilliant planet Jupiter has been attracting a great deal of skywatching attention lately, even from within brightly lit cities.

Look for this dazzling, silver-white object of magnitude minus 2.5 more than halfway up in the east-southeast sky as it darkens in the evening. Jupiter appears three times brighter than Sirius, the brightest star in the night sky, and is the most luminous "star" in the sky after Venus, inviting inspection the moment you set up a telescope.

Presently, Jupiter can be found within the faint stars of Cancer the Crab. Sadly, the plague of light pollution is robbing us of our celestial heritage, and poor Cancer is one of the victims. The Crab is difficult, if not impossible, to see under a light-polluted sky because it contains no star brighter than 4th magnitude. So, it's actually not very helpful to say that Jupiter is "found" among the stars of Cancer, as the constellation is tougher to spot than the planet! [Best Night Sky Events for March (Sky Maps)]

An enormous ball of gas

Jupiter is an enormous ball of hydrogen and helium that's 88,846 miles (142,984 kilometers) in diameter and lacks any solid surface. It has an overall mass nearly 318 times that of the Earth and 2.5 times the mass of all of the other planets combined. In many respects, Jupiter is more like a star than a planet.

"Big Jupe" has often been called "the amateur astronomer's planet." It has the largest apparent disk of any bright object in the sky after the moon and the sun. Its dark belts and bright zones, with their subtle markings — and, of course, its four large and bright moons, first observed by Galileo Galilei in 1610 — make Jupiter a perpetual center of interest.

The cloud bands, which can be glimpsed even with a small telescope, cross the disk of the planet parallel to its equator. Jupiter's disk, incidentally, appears a bit flattened at the poles because the planet is turning so fast on its axis. (It completes a full rotation in less than 10 hours.)

In a moderately large telescope, Jupiter resolves into a series of yellowish, tan and brown shadings, and a wealth of other details can be seen as well. Vast dark belts merge with one another or sometimes fade to insignificance. Brighter zones — actually smeared bands of ammonia clouds — vary in intensity and frequency, and are carved up with dark loops or rifts called festoons.

The famous Great Red Spot is the most conspicuous and longest-lived structure on Jupiter's surface. Scientists believe that the spot is a towering vortex whose color might perhaps be due to complex compounds that are constantly spewed from some heated atmospheric source below.

The spot's appearance has changed over the years. About half a century ago, it indeed looked like a prominent brick-red feature on the planet's disk. Nowadays, however, it appears to be lighter in contrast and appears more pinkish or salmon-colored. [Photos: Jupiter, the Solar System's Largest Planet]

Jupiter has more than 60 known moons. The planet's four Galilean moons — Io, Europa, Ganymede and Callisto —derive their names from the lovers of Zeus. (Zeus is the Greek equivalent of Jupiter, the king of gods in Roman mythology.)

The Galilean moons are among the most massive objects in the solar system — with the exception of the sun and the eight planets — and are even larger than the dwarf planets Pluto and Ceres. Ganymede is the largest moon in the solar system, and is even bigger than the planet Mercury. All four Galilean moons are bright enough that they could, if they were farther away from Jupiter, be sighted from Earth without a telescope. In fact, some people with exceptionally acute vision claim that they can glimpse the moons without the aid of binoculars or a telescope.

As they circle around Jupiter in paths turned nearly edgewise to the Earth, the Galilean moons appear to swing back and forth, nearly always staying in line. They can be followed for hours, even through binoculars. Through a telescope, you can watch as they speed in front of Jupiter, throwing their shadows on the planet, or vanish behind its disk or suddenly become eclipsed by its shadow. Currently, we are in an unusual cycle in which the moons occasionally will be seen to cross in front of each other, called "mutual" eclipses.

One amateur astronomer who assiduously keeps track of the happenings on Jupiter is Christopher Go, who resides in the Philippines. He would like to invite you to check out some of his amazing images of Jupiter on his website: http://astro.christone.net/jupiter

Editor's note: If you have an amazing skywatching photo of Jupiter or any other night-sky view you'd like to share for a possible story or image gallery, please contact managing editor Tariq Malik at spacephotos@space.com.