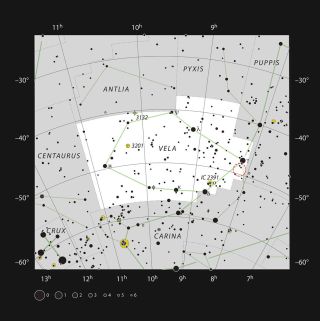 This chart shows the constellation Vela (The Sails); most of the stars that can be seen in a dark sky with the unaided eye are marked.
(Image: © ESO, IAU and Sky & Telescope)

As the calendar shifts from February to March, skywatchers' ship will really come in.

The ship in question is Argo Navis — nowadays, simply referred to as Argo — which can be seen at around 10 or 11 p.m. local time, low in the night sky near the southern horizon.

At one time, Argo was deemed the largest constellation. But in 1930, the International Astronomical Union (IAU) decided that the great ship was a bit too large and unwieldy. So Argo was broken up into four separate and smaller constellations: Carina, the Keel; Puppis, the Stern; Pyxis, the Mariner's Compass (which was once named Malus, the Mast); and Vela, the Sails. [March 2015 Skywatching: Planets and a Solar Eclipse (Video)]

Once the biggest of the big

Today, we recognize Hydra, the Water Serpent, as the largest constellation. This long celestial snake covers 1,303 square degrees, or 3 percent of the celestial sphere. But if we were to combine the four components that once made up the great ship Argo, we would end up with a constellation that measures fully 1,888 square degrees — 31 percent larger than Hydra.

Most standard star maps, by the way, do not show constellations' official boundary lines and thus do not give an accurate idea of the true size of a constellation. To see these boundaries, you would need to consult a good star atlas.

In fact, anyone seriously interested in the sky should have a star atlas. As an analogy, if you wanted to find your way around Chicago, a detailed street map would be a necessity. A map of the United States, or even of the state of Illinois, would not be of much use. Similarly, most star maps are designed with the intention to provide only an overview.

Argo supposedly represents the famous ship in which Jason and the Argonauts sailed on their expedition to Colchis. According to the legend, the ship was built by a son of Poseidon, the Greek god of the sea (known as Neptune in Roman mythology), out of giant pine logs that had been cut down in the forests of Mount Pelion and then hauled to the sea.

The Greek goddess Athena provided a fragment of oak from Dodona, who was endowed with the power of speech and the gift of prophecy, and set it in the prow to guide the expedition — a sort of enchanted GPS add-on.

Never had there been such a ship before.

Along the southern horizon on late evenings in March, skywatchers will be able to see the celestial version of this famous mythological vessel. Not too far away, to the west of the ship, flies Columba, the Dove, originally known as Columba Noachi, commemorating the dove that flew out from the biblical ark. This is appropriate, as some stories identify Argo not with Jason and the Argonauts but with Noah's Ark.

Unfortunately, only hints of Argo's glories can be seen from most of the United States; it sails high in the sky only when viewed from south of the equator. But about 5,000 years ago, it appeared farther north than it does now, thanks to the wobbling motion of Earth on its axis known as precession. Ancient stargazers located in Greece and Asia Minor would see this celestial ship sailing westward (albeit stern first) and along the Mediterranean horizon as the night progressed.

The treasures of Argo

Most of Argo's bright stars are members of a swath of blue giants that stretches along the southern Milky Way from Scorpius in the summertime sky to Orion in the winter.

In Carina, the ship's keel, there are a number of wondrous sights. There is the open cluster IC 2602, which skywatchers who live south of the equator sometimes refer to as the "Southern Pleiades," since it resembles a slightly fainter version of the Pleiades cluster and, like the famous Seven Sisters, has a central 3rd-magnitude star.

Just to the north of IC 2602 is Eta Carinae, a strange star that has the characteristics of a recurrent nova.  In 1843, it briefly shined almost as brightly as Sirius, the brightest star in the sky. While Eta Carinae is much dimmer now, some experts think that one day it will go supernova and blow itself apart. Today, this star is surrounded by a beautiful structure known as the Keyhole, or Eta Carinae nebula. [Supernova Photos: Great Images of Star Explosions]

Also in Carina, you'll find the brilliant yellow-white star, Canopus, the second-brightest star in the night sky. If you live south of 37 degrees north latitude (roughly, anywhere below the southernmost tip of Illinois), you can see this star directly below Sirius, skimming above the southern horizon.

Those south of the equator are probably also well acquainted with four stars in this part of the sky — two belonging to Carina and two belonging to Vela — known collectively as the "False Cross."

Not only do these four stars bear a superficial resemblance to the true Southern Cross (Crux), but the False Cross is even oriented in roughly the same way (though positioned farther to the north). Hence, an uninitiated observer might easily mistake the False Cross for the true one, but only the latter points to the south celestial pole (matching the Pointers of the Big Dipper in this respect).

And, in a way, there is a bit of irony here: Within the boundaries of what was once the largest of all the constellations, there's a facsimile of one of the most famous.

And here is the irony: The smallest of the now 88 officially recognized constellations is the Southern Cross!

Editor's Note: If you take an amazing photo of any skywatching sight that you'd like to share for a possible story or image gallery, please contact managing editor Tariq Malik at spacephotos@space.com.