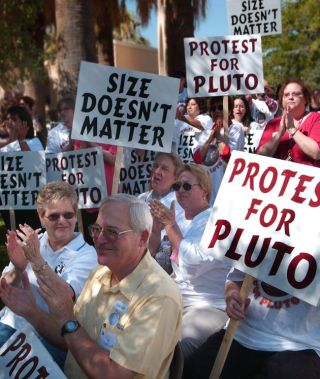 Protestors gathered September 1 at New Mexico State University in Las Cruces. Among the defenders of Pluto as a planet was Al Tombaugh, foreground, with his wife Cherylee Tombaugh to his right. Al Tombaugh is the son of the late Clyde Tombaugh, who discovered Pluto.
(Image: © NMSU/Darren Phillips)

Defenders of Pluto as a planet rallied at New Mexico State University last week, joined by the wife and son of Pluto's discoverer, Clyde Tombaugh.

The Sept. 1 gathering in Las Cruces was spurred by last month's decision by the International Astronomical Union (IAU) to reclassify Pluto as a "dwarf planet" and, by the new definition, not really a planet at all.

The message from the protestors: Don't rewrite the textbooks yet as the debate's not over.

New Mexico State University (NMSU) astronomer Bernie McNamara, speaking to a high-spirited group of Pluto supporters outside the university's Zuhl Library. McNamara pointed out that the IAU had been considering a different set of criteria for defining what a planet is- criteria that would have expanded the number of planets from nine to 12- shortly before the Aug. 24 vote was taken.

The definition was reworked at the last minute and only a little more than 400 IAU members voted. There are about 10,000 professional astronomers around the globe.

"This was not a statement by the astronomical community at large," McNamara said, adding that a petition opposing the IAU definition of a planet is now circulating among the world's planetary scientists and astronomers.

McNamara joined about 50 NMSU students and staff members in their criticism of the IAU vote.

There is a strong tie between the university, Pluto, and discoverer of the object, Clyde Tombaugh ... something like a family affair.

Tombaugh was 24 years old when he discovered Pluto from the Lowell Observatory in 1930. Tombaugh came to New Mexico State University in 1955 and developed a world-class astronomy research program. He officially retired as a professor emeritus in 1973 but he continued to be active as a lecturer for many years after that.

"I'm disappointed that this has happened," Patsy Tombaugh, 93, told The Albuquerque Tribune.

Full Coverage: The Debate and the IAU Vote

Most recent stories at top