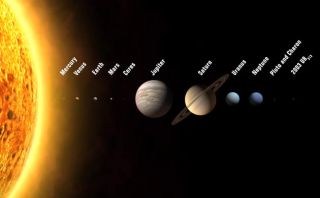 The 12 planets under the newly proposed IAU definition. Planet sizes are shown to scale but their orbital distances are not to scale.
(Image: © IAU/Martin Kornmesser)

The tally of planets in our solar system would jump instantly to a dozen under a highly controversial new definition proposed by the International Astronomical Union (IAU).

Eventually there would be hundreds as more round objects are found beyond Neptune.

The proposal, which sources tell SPACE.com is gaining broad support, tries to plug a big gap in astronomy textbooks, which have never had a definition for the word "planet." It addresses discoveries of Pluto-sized worlds that have in recent years pitched astronomers into heated debates over terminology.

That would make Caltech researcher Mike Brown, who found 2003 UB313, formally the discoverer of the 12th planet. But he thinks it's a lousy idea.

"It's flattering to be considered discoverer of the 12th planet," Brown said in a telephone interview. He applauded the committee's efforts but said the overall proposal is "a complete mess." By his count, the definition means there are already 53 known planets in our solar system with countless more to be discovered.

Brown and other another expert said the proposal, to be put forth Wednesday at the IAU General Assembly meeting in Prague, is not logical. For example, Brown said, it does not make sense to consider Ceres and Charon planets and not call our Moon (which is bigger than both) a planet.

IAU members will vote on the proposal Thursday, Aug. 24. Its fate is far from clear.

Q&A on the Proposal / Gallery: The 12 "Planets" / Read the Draft Resolution

The definition, which basically says round objects orbiting stars will be called planets, is simple at first glance:

"A planet is a celestial body that (a) has sufficient mass for its self-gravity to overcome rigid body forces so that it assumes a hydrostatic equilibrium (nearly round) shape, and (b) is in orbit around a star, and is neither a star nor a satellite of a planet."

"Our goal was to find a scientific basis for a new definition of planet and we chose gravity as the determining factor," said Richard Binzel, an MIT planetary scientist who was part of a seven-member IAU committee that hashed out the proposal. "Nature decides whether or not an object is a planet."

"I think they did the right thing," said Alan Stern, a planetary scientist at the Southwest Research Institute and leader of NASA's New Horizons robotic mission to Pluto. Stern expects a consensus to form around the proposal.

"They chose a nice economical definition that a lot of us wanted to see," Stern told SPACE.com. "A lot of the other definitions had big problems. This is the only one that doesn't have big problems."

"I feel that they have made the most rational and scientific choices; namely ones which are physically based and can be most readily verified by observations," said Gibor Basri, an astronomy professor at the University of California, Berkeley. Basri made a similar proposal to the IAU in 2003, part of the long-running saga of failed attempts to define "planet."

But the IAU draft resolution explaining the definition is more complex [Read the Draft Resolution], with caveats and suggestions and surprises that some astronomers think render the entire proposal unworkable.

In particular, this aspect was criticized: A pair of round objects that orbit around a point in space that is outside both objects-meaning the center of gravity (or barycenter) is between the two planets in space as with Pluto and Charon-would be called double planets. Alan Boss, a planet-formation theorist at the Carnegie Institution of Washington, called the deliniation arbitrary.

Brown said there will likely be other similar pairings discovered, and it's even possible a "triple planet" would be found given this definition.

In response to the criticism, Binzel said it was important to distinguish between planets and satellites. He noted that barycenters are used to define and describe double stars and so the concept should apply to planets, too.

"The planet and satellite definition must be universally applicable, to all solar systems, not just our own," Binzel said by email from Prague. "For example: Picture a pair of Jupiters discovered in another solar system. Would one of these Jupiters be a planet, and the other a satellite? The barycenter criterion means that a pair of Jupiters would be a double planet."

Other astronomers saw other problems.

"It looks to me like a definition that was written by a committee of lawyers, not a committee of scientists," Boss said. "I think these criteria are as arbitrary as any other you might come up with."

Asteroid Ceres, since it is round, would be considered a planet. Interestingly, Ceres was called a planet when first discovered in 1801, then reclassified. It is just 578 miles in diameter, compared to 1,430 for Pluto and 7,926 for Earth.

And if astronomers determine that asteroids Pallas, Vesta, and Hygeia are also round, "they will also have to be considered planets," said Owen Gingerich, an historian and astronomer emeritus at Harvard who led the committee. The IAU proposal suggests (but does not require) that these be called dwarf planets. Pluto could also be considered a dwarf, which the IAU recommends as an informal label.

So to recap: Pluto would be a planet and a pluton and also a dwarf.

Boss was bothered by the lack of definitiveness on this and other points.

Boss, along with Stern, was on an IAU committee of astronomers that failed to agree on a definition. After a year, the IAU disbanded that committee and formed the new one, which included the author Dava Sobel in an effort to bring new ideas to the process.

Boss called their proposal "creative" and "detailed" but said it does not hang together as a cohesive argument.

"I'm sure this will engender a lot of heated discussion," Boss said by telephone prior to departing for the Czech Republic to cast his ballot. "This is what everyone will be talking about in the coffee shops of Prague for the next few days."

Given all the nuances in the definition, a dozen other objects would be put on an IAU list of "candidate planets" which, upon further study, might bring the tally of planets in our solar system to 24.

Eventually the inventory of planets would soar.

Stern, the New Horizons mission leader, said there could be "hundreds and maybe a thousand" objects in our solar system that are at least as big as Pluto. That's fine with him. "This is what we do as scientists. You discover new things, you adapt to new facts."

Brown, the discoverer of the potential 12th planet, said the basic definition is fine, but "the resolution itself is a complete mess."

The resolution calls for a new IAU committee that would evaluate other candidate planets. Normally, that's a process that takes place in a scientific journal, Brown said. He called the notion of an IAU gatekeeper "bizarre" and "really a bad idea. The IAU should make a definition, then it's up to scientists to go about their business" of deciding what objects fit the definition.

Binzel defended the approach: "The IAU has existing committees that can do this-it is what the IAU
does. Someone has to officially bestow names, etc. It is just the way the system works." He added that quality papers published in science journals should and would continue to be part of the process of determining planet status.

Nobody can yet say how the vote will go.

Brown worries, however, that the vast majority of astronomers at the IAU meeting work in other fields, outside planetary science. "They are likely vote 'yes' because they're not familiar with the issue and, mostly, because they're sick of the topic," he said.