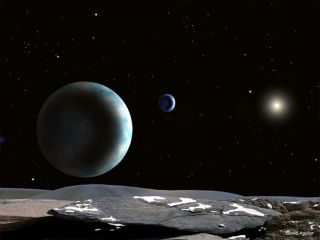 A new "scientific and simple" proposal to define the word "planet" will be released Wednesday and astronomers will vote on it next week. It is not clear whether the definition will settle a long-running debate on the status of Pluto, however.

The International Astronomical Union (IAU) will propose wording to delineate planets from other small objects at its 12-day General Assembly meeting in Prague. The meeting opened today and the proposal will be released to IAU member and to the public Wednesday.

Committee members will not say how Pluto will be defined, but the diminutive planet will definitely be included in the wording.

"Yes, it is very clear within what will be released ... [Pluto] is very specifically in or out," said Richard Binzel, an MIT planetary scientist on a seven-person committee that developed the definition.

"I think we have come up with a very reasonable definition that in the end will be widely adopted," Binzel said by telephone from Prague today. "And we will move forward. I think all will agree that it's time to move forward."

The roots of the problem go back to 1930, when Clyde Tombaugh discovered Pluto. It was classified as the 9th planet. But in recent years, astronomers have found other round worlds out beyond Neptune that are nearly as big as Pluto. One object, 2003 UB313, is the same size as Pluto.

All these relatively small objects have offbeat orbits that trace oblong paths. Some, like Pluto, soar well above and below the main plane of the solar system in which the other eight planets orbit.

For these reasons, many astronomers have long said that it was a mistake to call Pluto a planet, and many favor demoting it to some new class of object called minor planet or dwarf planet. Some think Pluto should remain a regular planet for cultural and historic reasons. But doing that would logically mean defining the handful of other small round worlds as planets. And experts say dozens if not hundreds more Pluto-like objects remain to be found on the outskirts of our solar system.

For a year, a committee of planetary scientists within the IAU tried to come up with a definition. They failed. So the IAU gave the task to the separate 7-member panel that includes Binzel and author Dava Sobel.

Owen Gingerich, an historian and astronomer emeritus at Harvard, told NPR last week that the proposal, "will make the Plutocrats and the children of the United States happy."

Gingerich's words imply that Pluto will not lose planet status. One possibility is that the proposal would have Pluto termed a dwarf planet or minor planet. The setup would logically divide planets into terrestrial planets (Mercury, Venus, Earth, Mars), giant planets (Jupiter, Saturn, Uranus, Neptune) and the dwarfs.

One possible alternative is Pluto could simply remain a planet with no prefix. This much is known:

"We have come up with a surprisingly scientific definition," Binzel said. "It's both scientific and simple."

That suggests things like size, orbital characteristics, location and formation method might be included in the definition.

One week to ponder

A vote on the definition by IAU members is slated for Thursday, Aug. 24. SPACE.com first reported the likelihood of this vote back in June (IAU members must first vote on a proposal to re-institute their right to vote on the matter).

Most astronomers, including those very close to the issue, are in the dark about what will happen.

"Assuming they come up with a resolution and it is presented, it is unclear to me if the vote will succeed," said Alan Boss, a planet-formation theorist at the Carnegie Institution of Washington. "Even if it does succeed I suspect some people will resist it."

Boss was on the original IAU committee that tried to forge a definition. Given the inability of that group to reach consensus, and the strongly held opinions of various group members, Boss said trying to solve the problem with experts outside the planetary science community is a worthwhile experiment. But he's not sure it'll work.

"I'd be thrilled and pleased, but I don't expect that this little subgroup will come up with a definition that everyone can approve and accept," Boss told SPACE.com today. What will really count, he said, is what the editors of scientific journals allow to be printed over the next 10 to 20 years.

The controversy, which heated up in 1999 and has not abated since, is not limited to planetary scientists.

"Every astronomer, not just planetary scientists, probably has a pretty strong opinion about how [Pluto] should be named," Boss said. "Even people on the street, elementary school teachers- everyone seems to have an opinion on this. I think it's going to be hard for people to accept any major changes one way or another."

Boss said he wouldn't be surprised if the IAU vote will be split in thirds, much like the opinions of the original committee charged with developing a definition. And he said the vote should not necessarily be the end of the debate. Future discoveries of objects beyond Neptune could force continual re-evaluation of classification systems and nomenclature.

"It's not necessarily something that should be decided by a vote for all time," he said. "Science keeps moving."

Binzel is confident that resolution looms: "If we have done our job, this will be the end of any significant debate."