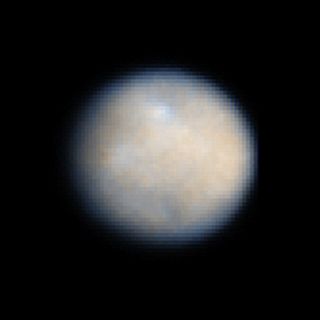 The dwarf planet Ceres, also the largest asteroid in the solar system, is seen here in an amazing view from the Hubble Space Telescope. In March 2015, NASA's Dawn spacecraft is expected to enter orbit around Ceres to study the object like never before.
(Image: © NASA, ESA, J. Parker (Southwest Research Institute), L. McFadden (University of Maryland))

SAN FRANCISCO — A NASA probe is about to get the first up-close look at a potentially habitable alien world.

In March 2015, NASA's Dawn spacecraft will arrive in orbit around the dwarf planet Ceres, the largest object in the main asteroid belt between Mars and Jupiter. Ceres is a relatively warm and wet body that deserves to be mentioned in the same breath as the Jovian moon Europa and the Saturn satellite Enceladus, both of which may be capable of supporting life as we know it, some researchers say.

"I don't think Ceres is less interesting in terms of astrobiology than other potentially habitable worlds," Jian-Yang Li, of the Planetary Science Institute in Tucson, Arizona, said Thursday (Dec. 18) during a talk here at the annual fall meeting of the American Geophysical Union. [Photos: The Dwarf Planet Ceres]

The dwarf planet Ceres — which is about 590 miles (950 kilometers) wide — is thought to have a lot of water, based on its low overall density (2.09 grams per cubic centimeter; compared to 5.5 g/cubic cm for Earth). Ceres is likely a differentiated body with a rocky core and a mantle comprised of water ice, researchers say, and water-bearing minerals have been detected on its surface.

Indeed, water appears to make up about 40 percent of Ceres' volume, Li said.

"Ceres is actually the largest water reservoir in the inner solar system other than the Earth," he said. However, it's unclear at the moment how much, if any, of this water is liquid, he added.

As far as energy goes, Ceres has access to a decent amount via solar heating, since the dwarf planet lies just 2.8 astronomical units (AU) from the sun, Li said. (One AU is the distance between Earth and the sun — about 93 million miles, or 150 million km). Europa and Enceladus are much farther away from our star — 5.2 and 9 AU, respectively.

Both Europa and Enceladus possess stores of internal heat, which is generated by tidal forces. This heat keeps the ice-covered moons' subsurface oceans of liquid water from freezing up, and also drives the eruption of water-vapor plumes on Enceladus (and probably Europa as well; researchers announced last year that NASA's Hubble Space Telescope spotted water vapor erupting from the Jupiter moon in December 2012).

Intriguingly, scientists announced the discovery of water-vapor emission from Ceres — which may also possess a subsurface ocean — earlier this year.

Ceres' plumes may or may not be evidence of internal heat, Li said. For example, they may result when water ice near Ceres' surface is heated by sunlight and warms enough to sublimate into space.

"Right now, we just don't know much about the outgassing on Ceres," Li said.

Dawn should help bring Ceres into much clearer focus when it reaches the dwarf planet this spring. The spacecraft, which orbited the huge asteroid Vesta from July 2011 through September 2012, will map Ceres' surface in detail and beam home a great deal of information about the body's geology and thermal conditions before the scheduled end of its prime mission in July 2015.

Ground-based instruments should also play a role in unveiling Ceres. For example, the Atacama Large Millimeter/submillimeter Array, or ALMA — a huge system of radio dishes in Chile — has the ability to probe deeper than Dawn, going into Ceres' subsurface and shedding more light on the dwarf planet's composition and thermal properties, Li said.

"This is highly complementary to the Dawn mission," he said.