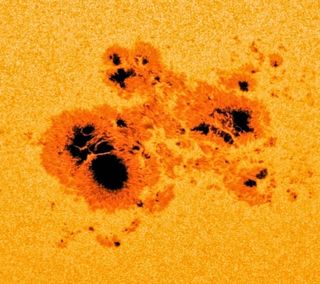 Active Region 12192, a sunspot, is likely to produce coronal mass ejections, which could wreak havoc on satellites and power grids.
(Image: © NASA/SDO/Zell)

The largest sunspot to appear on Earth's nearest star in more than two decades is once again pointed at the planet, and it will likely kick-start solar storms, NASA scientists say.

The massive sunspot, previously known as Active Region 12192, was turned toward Earth in October and early November, but rotated out of view. While it was on the Earth-facing side of the sun, the sunspot did not produce any coronal mass ejections — hot bursts of material ejected into space at 4 million mph (6.4 million km/h) — which have the potential to damage satellites and power grids. Now the active region has rotated back around to face Earth again, and although the sunspot has shrunk in size, it will likely be disruptive, NASA scientist Holly Gilbert told Space.com during a video interview about the massive sunspot.

"This time around, it's more likely to have some coronal mass ejections associated with it, even though the solar flares might be smaller," said Gilbert, chief of the Solar Physics Laboratory at NASA's Goddard Space Flight Center in Maryland. "We have a good idea, based on the structure of that magnetic field and the sunspot, that it's very possible that it will create some midlevel flares." [The Biggest Solar Flares of 2014]

Sunspots are blemishlike regions on the sun where magnetic fields become very tightly bundled. The magnetic fields block light and heat from passing through the sunspot region, causing them to appear dark compared to the surrounding area.

AR 12192 has been renamed AR 12209 now that it is once again on the Earth-facing side of the sun. The sunspot was out of view of the Earth for about two weeks before reappearing. It is still large enough for 10 Earths to fit inside it, Gilbert said. In terms of size, it ranks 33rd largest of 32,908 active regions recorded since 1874, and it's the largest sunspot recorded since 1990.

The huge spot released six major solar flares in Earth's direction in October and early November, plus a series of smaller flares, before moving to the side of the sun facing away from Earth. Solar flares can lead to the production of coronal mass ejections, also called CMEs, and Gilbert said it was "a little strange" that the major solar flares produced by AR 12192 did not result in any CMEs.

"[CMEs] can affect our satellites, our technology; it can cause power grid outage," Gilbert said. "So it's very important for us to understand when they're going to happen and how they're going to impact us here on Earth."

Scientists cannot yet predict when a sunspot will produce flares or if those flares will kick up coronal mass ejections. But NASA knows when these flares and CMEs occur, thanks to a fleet of satellite missions that are studying the sun and its effect on the Earth. NASA's Solar Dynamics Observatory, which was designed to study the causes of space weather and how it affects Earth, monitors the sun around the clock.

AR 12209 will continue to shrink and will eventually disappear, but it could make another trip around the sun before it goes away completely. The sun is currently headed into a phase of minimal solar activity, during which scientists expect fewer active regions to appear.