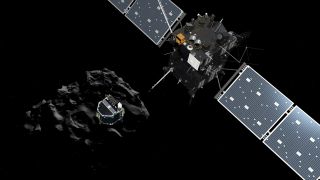 An artist's illustration of the European Space Agency's Philae lander (left) after being released from its Rosetta spacecraft mothership on Nov. 12, 2014 to begin a seven-hour descent to the surface of Comet 67P/Churyumov-Gerasimenko. It is the first time such a soft-landing on a comet has ever been attempted.
(Image: © ESA/ATG Medialab)

The first-ever attempt to make a soft landing on a comet is now underway.

If all went according to plan, the European Space Agency's Philae lander separated from its Rosetta spacecraft mothership at 3:35 a.m. EST (0935 GMT) Wednesday (Nov. 12), beginning a long, slow journey to the surface of Comet 67P/Churyumov-Gerasimenko.You can watch the historic comet landing live on Space.com, courtesy of the European Space Agency (ESA).

"We've been living in flight together for 10 years, now Philae's gone," Rosetta flight director Andrea Accomazzo said during a webcast just after separation comfirmation. "It's on its path down to the comet." [Rosetta Comet Landing: Full Coverage]

The 2.5-mile-wide (4 km) comet's gravity field is extremely weak, so Philae will secure itself to 67P's frigid surface with harpoons.

Mission controllers ran into a problem while getting Philae ready for landing. Scientists discovered that a thruster that would have been used to aid in Philae's landing could not be turned on.

“The cold gas thruster on top of the lander does not appear to be working so we will have to rely fully on the harpoons at touchdown,” Stephan Ulamec, Philae Lander Manager at the DLR German Aerospace Center said in a statement. “We’ll need some luck not to land on a boulder or a steep slope.”

The $1.3 billion Rosetta mission blasted off in March 2004 and finally caught up with Comet 67P this past August after a decade-long chase through deep space. On Aug. 6, Rosetta became the first spacecraft ever to enter orbit around a comet.

ESA officials hope Philae makes some more history Wednesday morning. While NASA's Deep Impact mission slammed a probe into Comet Tempel 1 in 2005, no spacecraft has ever touched down softly on one of these icy objects.

If all goes well, Philae will photograph 67P up-close and analyze samples from the comet's surface and subsurface. (The lander is equipped with a drill that can bore more than 8 inches, or 20 centimeters, deep.)

But all will not be lost if Philae's landing attempt fails, ESA officials say; after all, Rosetta is scheduled to continue orbiting and studying Comet 67P through at least December 2015, four months after the body's closest approach to the sun.

Observations made by Philae and Rosetta should help researchers learn more about comet composition and behavior, mission officials say. This information, in turn, should shed light on the conditions present when Earth and other planets were taking shape, since comets are relatively pristine remnants left over from the solar system's formation about 4.6 billion years ago.

Comet 67P/Churyumov-Gerasimenko, which was discovered in 1969, has a strange, two-lobed shape that makes it look like a rubber ducky bath toy from some angles. The comet completes one lap around the sun every 6.5 years.