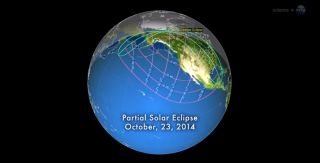 This graphic, provided by NASA, shows which parts of the globe will be able to see the partial solar eclipse of Oct. 23, 2014.
(Image: © Science@NASA)

Viewers throughout most of the United States are in position to see a partial solar eclipse Thursday afternoon (Oct. 23). Unfortunately, clouds will likely get in the way in some parts of the country.

One of those regions is the northeastern United States, including all of New England. In addition, Delaware, Maryland and Virginia will also fall victim to widespread cloud cover that could scuttle attempts to view the partial solar eclipse.

The culprit is an early-season nor'easter, a low-pressure storm system sitting off Cape Cod that will generate lots of clouds. The clouds may also be accompanied by areas of rain, drizzle and fog. So extensive are the nor'easter's effects, in fact, that clouds might even extend as far west as West Virginia and Ohio. [Partial Solar Eclipse of October 2014: Visibility Maps]

You can watch the solar eclipse webcast at Space.com beginning at 5 p.m. EDT (2100 GMT), with live feeds available from the Slooh Community Observatory, Griffith Observatory in Los Angeles and the University of Arizona's SkyCenter at Mount Lemmon.

Over the nation's midsection, a band of high- to mid-level cloudiness extending from Minnesota and the eastern Dakotas south to Oklahoma and through central Texas might allow for only some occasional glimpses of the eclipse.

The clouds might be thin enough at times to allow viewers to see the eclipsed sun, but even so, prospective viewers are strongly warned not to stare at the sun. Even though its visible light might be considerably reduced, our star's dangerous ultraviolet and infrared wavelengths will still penetrate the clouds and can damage your eyesight without your immediately being aware of it. View a solar eclipse only indirectly, or with appropriate filters.

Across much of Washington state, Oregon and Northern California, a cold front moving inland from the Pacific Ocean will probably generate cloud cover as well as scattered precipitation, which likely will hide much, if not all, of the solar eclipse from view.

Finally, a band of cloudiness over south Florida could also cause problems for some viewers in the Sunshine State.

Most other locations should have good to excellent viewing conditions for the eclipse. People in the north-central and northwestern United States will see the greatest percentage of the solar disk covered by the moon — nearly 70 percent in Juneau, Alaska, for example, and 64 percent in Seattle.

As a bonus, people in some locations might see the edge of the moon graze or hide an unusually large sunspot now nearing the middle of the solar disk. Those using safe solar filters can readily see this large spot, known as Active Region 2192, with their naked eye.

Editor's Note: If you take an amazing skywatching photo of the partial solar eclipse or any other celestial sight that you'd like to share for a possible story or image gallery, please contact managing editor Tariq Malik at spacephotos@space.com.