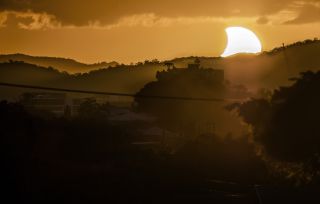 A partial solar eclipse will darken North American skies Thursday afternoon (Oct. 23), and you can watch the dramatic celestial event online if clouds hinder your view.

The online Slooh Community Observatory will air a special three-hour webcast for the partial solar eclipse today starting at 5 p.m. EDT (2100 GMT). You can watch the show — which will feature live views from Arizona's Prescott Solar Obsevatory and other telescopes around the world — at http://www.slooh.com.

You can also watch the solar eclipse webcast at Space.com. Other webcast feeds are expected by the Griffith Observatory in Los Angeles, California and the University of Arizona's SkyCenter at Mount Lemmon. [Solar Eclipse of October 2014: Visibility Maps]

Observers in virtually all of North America should have good views of the partial solar eclipse, weather permitting. Many parts of the United States and Canada will see about half of the sun's disk obscured by the moon; "greatest eclipse" occurs over the Canadian Arctic, where 80 percent of the sun will be blocked.

Parts of eastern Canada and the northeastern United States will miss out, however, because the sun will set there before the eclipse gets underway.

The solar eclipse will begin in the early, mid or late afternoon Thursday, depending on where you live. To see when the eclipse occurs in your location, check out these tables compiled by NASA eclipse expert Fred Espenak: http://eclipse.gsfc.nasa.gov/OH/OHtables/OH2014-Tab05.pdf (for viewers in the United States) and http://eclipse.gsfc.nasa.gov/OH/OHtables/OH2014-Tab04.pdf (for people in Canada and Mexico).

Solar eclipses occur when the moon, sun and Earth line up, with the moon blocking all or part of the solar disk from viewers' perspective. The last one occurred on April 29 of this year.

WARNING: If you plan to observe today's eclipse, be very careful. Never look directly at the sun without special safety equipment; permanent and serious eye damage could result. You can build a pinhole camera or solar projector with binoculars to safely observe the eclipse.

"Even if the partially eclipsed sun is setting at your location, and appears red or orange and not too bright, it would be wise to glance only briefly at it," Slooh astronomer Bob Berman said in a statement. "Moreover, telephoto lenses amplify the brightness, and it would not be safe to look at the sun through your camera lens even if the sun is setting. Eyesight is precious, and if there’s any doubt, don't do it."

Thursday's eclipse serves as a warmup of sorts for an even more dramatic event three years from now. On Aug. 21, 2017, viewers across the United States will be treated to a total solar eclipse — the first one visible from the contiguous 48 states in nearly 40 years.

Editor's Note: If you take an amazing skywatching photo of the partial solar eclipse or any other celestial sight that you'd like to share for a possible story or image gallery, please contact managing editor Tariq Malik at spacephotos@space.com. This headline for this story was changed at 12:30 p.m. ET to reflect that the solar eclipse, while visible at sunset from the eastern coast of North America, will be visible in the afternoon from regions farther west.