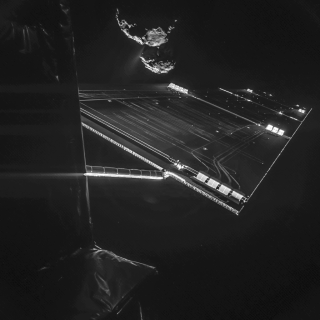 A camera aboard Rosetta's lander, Philae, snapped this image of comet 67P/Churyumov-Gerasimenko on Oct. 7.
(Image: © ESA/Rosetta/Philae/CIVA)

With an icy comet lurking just over its shoulder, a far-flung European spacecraft snapped a selfie in outer space.

The photographer was Philae, a small lander attached to the European Space Agency's (ESA) Rosetta probe.

At the time (Oct. 7), Philae was just 10 miles (16 kilometers) away from the Comet 67P/Churyumov-Gerasimenko — but they're about to get much closer. On Nov. 12, Philae is scheduled to separate from Rosetta to make an unprecedented touchdown on the comet. [See more incredible photos taken by the Rosetta mission]

After a decade-long, 4-billion-mile (6 billion km) journey from Earth, Rosetta was awakened from a deep sleep in January. Then, through a series of carefully choreographed maneuvers, the probe arrived at 67P/Churyumov-Gerasimenko in August and became the first spacecraft to ever orbit a comet.

The new image, released by ESA this week, shows off Rosetta's glinting 52-foot-long (16-meter) solar arrays. The composition is almost identical to a selfie Philae snapped last month, but at 31 miles (50 kilometers) away, the comet looked much smaller in that photo.

Comet 67P/Churyumov-Gerasimenko slightly resembles a rubber duck in shape, and its "neck" is shedding some gas and dust. Last month, ESA officials announced Philae's targeted landing site on the smaller lobe of the comet, dubbed "Site J," which can also be seen in the new image.

ESA officials said this is the last image Philae will take while it's still attached to Rosetta. They expect the lander's Comet Infrared and Visible Analyser, or CIVA, to snap its next image shortly after its split-up with the orbiter. Then if the landing goes smoothly, Philae will capture the first images ever taken from a comet's surface.

Scientists want an intimate look at Comet 67P/Churyumov-Gerasimenko because comets contain ancient material leftover from the formation of the solar system — and they may have even played a role in seeding water on Earth. Philae won't just be snapping photos; they lander will also drill into the surface of the comet to allow scientists to analyze the icy wanderer's composition. Philae and Rosetta will escort the comet as it loops around the sun to study how it reacts to the increasing intensity of solar radiation.