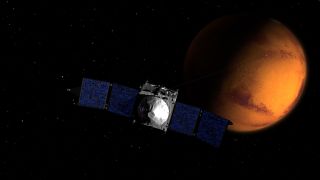 MAVEN, NASA's newest Mars orbiter, is shown near the Red Planet in this artist's illustration. The spaceraft, which launched in November 2013, will arrive at Mars on Sept. 21, 2014.
(Image: © NASA's Goddard Space Flight Center)

A NASA spacecraft built to study the atmosphere of Mars like never before will arrive at the Red Planet tonight (Sept. 21) and you can watch it live online.

After 10 months in deep-space, NASA's Mars Atmosphere and Volatile EvolutioN (MAVEN) spacecraft is expected to enter orbit around Mars and begin a one-year mission studying the planet's upper atmosphere. The Mars arrival will cap a 442 million-mile (711 million kilometers) trek across the solar system.

"So far, so good with the performance of the spacecraft and payloads on the cruise to Mars," David Mitchell, NASA's MAVEN project manager at the Goddard Space Flight Center in Greenbelt, Maryland, said in a statement. "The team, the flight system, and all ground assets are ready for Mars orbit insertion."

The $671 million MAVEN spacecraft eight instruments to study the Martian atmosphere in detail. It is one of two missions that launched toward Mars last November and are making their arrival this month. The other probe is India's Mars Orbiter Mission, which launched just before MAVEN and will arrive at the Red Planet on Wednesday (Sept. 24).

The atmosphere of Mars

Mars' upper atmosphere is an escape zone for molecules floating dozens of miles from the planet's surface. Scientists think that, as the solar wind hits the atmosphere, the radiation strips away the lighter molecules and flings them into space forever. [NASA's MAVEN Spacecraft: 10 Surprising Facts]

"The MAVEN science mission focuses on answering questions about where did the water that was present on early Mars go, about where did the carbon dioxide go," said Bruce Jakosky, the mission's principal investigator at the University of Colorado, Boulder's Laboratory for Atmospheric and Space Physics. "These are important questions for understanding the history of Mars, its climate, and its potential to support at least microbial life."

The upper atmosphere of Mars likely changes as the sun's activity increases and decreases, which is why MAVEN investigators hope to run the mission for longer than a year, they said. The sun is at the peak of its 11-year cycle of solar flares and particle emissions but will begin to quiet down as MAVEN enters a possible extended mission.

To make projections about how the Martian atmosphere changed over time, scientists need to understand what's happening now. One puzzle that researchers are struggling to solve is where all the water on Mars went, given there is evidence of water-soaked minerals and liquid-carved canyons on the planet's surface.

Although Mars is now too cold for flowing water, it might have had a thicker atmosphere in the past that warmed its surface and allowed the liquid to remain stable on the surface, scientists say. However, one complication is that the sun was about 30 percent less luminous four billion years ago than it is now, which means less solar radiation would have been striking and warming the Red Planet's atmosphere and surface.

"Obviously, we can't go back and sample the early sun, but we have other stars that are similar to our star — G-type stars, the classification scheme where our star fits — and we can measure what kind of solar radiation they put out," MAVEN mission scientist Steve Bougher told Space.com.

Bougher is a researcher at the University of Michigan who is studying how the atmospheres of Venus, Earth and Marscompare. All three planets are rocky and relatively close to the sun, but their environments are vastly different. Venus has a runaway greenhouse effect that boiled any surface liquids away, Mars is cold and has a thin atmosphere, and Earth is the only atmosphere known to host life.

Much of what scientists know about Mars' upper atmosphere comes from just a few minutes' worth of data from the two Viking landers that took measurements on their way to the Martian surface in the 1970s, Bougher said. While other NASA spacecraft have since supplemented that data somewhat, MAVEN scientists aim to gather much more.

Bougher is interested in studying the speed at which ions (charged atoms) and neutral gases leave the atmosphere of Mars. This process could change with solar activity, and also as dust storms sweep the planet's surface. MAVEN will arrive just as the Martian storm season begins, Bougher said.

Jakosky, MAVEN's lead researcher, is examining how stable isotopes (element types) of hydrogen and its heavier version, deuterium, changed over time. In theory, as the solar wind hit the Red Planet's atmosphere, the lighter hydrogen in the atmosphere should have been stripped away and decreased proportionally near Mars.

"One of the really overarching questions about Mars is whether there was ever life," Jakosky said in a NASA news conference Wednesday (Sept. 17).

"We're trying to understand the context in which life might have existed," Jakosky said. Any life on Mars would have interacted with its environment, so MAVEN could help with NASA's ongoing research into the "boundary conditions" for life, he added.

MAVEN will began making science measurements around Nov. 8, but the spacecraft will take a time-out from its commissioning phase to watch Comet Siding Spring pass close by on Oct. 19. So far, it looks like there won't be enough dust to hurt the spacecraft, but MAVEN will be maneuvered to minimize its exposure to the comet's dust as a safety precaution.